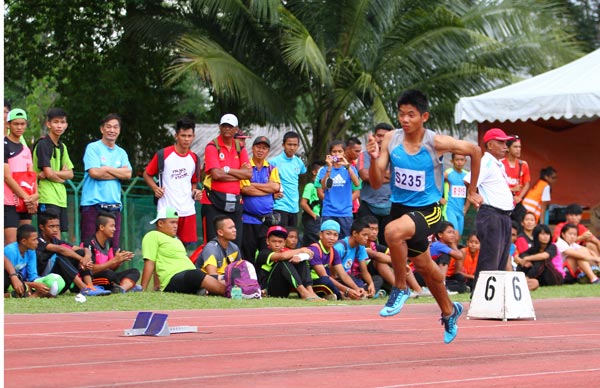 File photo of Quek Lee Yong in action at a schools meet earlier this year.

The versatile Quek also bagged the gold in the 200m sprint when he crossed the finishing line with a time of 23.18s.

Norris Foo, who competed in the Women Open, was crowned the sprint queen as she posted a time of 12.64s to win the 100m, with Dana from Dynamic Athletic Club taking the silver in 13.54s while SMK Tabuan Jaya’s Ayu Nazira Yussri won the bronze with 13.93s.

Grace also picked up a silver in the discus by recording 33.46m to finish after fellow Sukma and Sarikei teammate Queenie Ting Kung Ni whose golden throw was 37.96m.

Wong Siao Jing made it a clean sweep for SDAAA when she finished in third spot with her throw of 30.96m.

Ting Aik Hou from Miri Division Amateur Athletic Association also performed up to expectations when he landed the Men’s Open shot putt with a throw of 12.15m.

Eric Tiong Ing Kuen of Sarikei came in second with 10.95m while Ho Ping of SMK Green Road took the bronze with a throw of 10.44m.

389 athletes from 22 teams competed in the championship organised by the Sarawak Amateur Athletic Association.