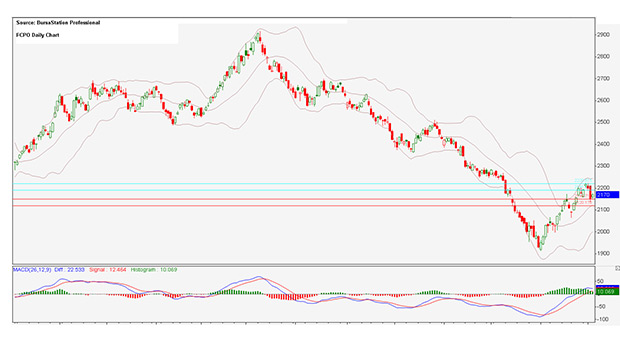 Malaysian palm oil futures edged higher on Friday to 2,170, due to crude oil rebounding from a 27 month low, as well as recovering soybean prices caused by heavy rain which slowed down the speed of harvesting across the US Midwest, according to Reuters.

Trading volume decreased to 159,166 contracts from a total of 201,564 contracts last Monday to Thursday.

Cargo surveyor, ITS reported that exports of Malaysia’s palm oil products for September increased 16.3 per cent to 1.498 million compared to 1.288 million during August. Overseas demand was strong from the EU, China, and the rest of Asia as overseas buyers took advantage of the removal of export duty.

SGS’s report showed that Malaysia’s palm oil export climbed 16.5 per cent to 1.494 million in September compared with 1.283 million during August.

Spot ringgit lingered within a tight range on Friday, eventually strengthening to 3.256, due to mixed feelings from investors waiting to analyse the US jobs report.

On the whole, the ringgit recovered from a six-month high, at 3.286, as investors began positioning themselves for when the Fed will raise interest rates. The ringgit eased due to the government’s move to cut fuel subsides, coupled with a factory report showing that US economy is slowing down.

In September, the dollar gained 3.7 per cent against the ringgit. The ringgit weakened the most this month after two years, as investors believed there was a slim chance that the central bank will increase rates by the end of this year.

Dorab Mistry,  a leading crude palm oil analyst, determined that palm oil prices could fall again to reach a new five and a half year low due to higher production and stocks in both Malaysia and Indonesia, paired with low demand.

Malaysia’s output could reach 20 million tonnes while Indonesia’s production could break 30 million tonnes. However, if the ringgit continues to weaken this could support the price at above 2,000. They foresee edible oils imports in India to increase half a million tonnes starting in November.

The USDA expects soybean stocks by the end of this year to be smaller than initially anticipated. US crop stocks for soybeans fell 35 per cent to 92 million bushels from a year ago.

According to the FCPO daily chart, on Monday, prices fell due to declining edible oil prices in foreign markets. Soybean fell to a four-year low as ideal warm weather increased the pace of harvesting to record amount of crops across the US, and low volume, according to Reuters.

On Tuesday, the price reached one and a half month high, due to cargo surveyor’s reports showing strong overseas demand in September, while gains in Chinese soy oil markets lifted outlook, according to Reuters. On Wednesday, the price fell as investors were cautious over record supplies of rival edible oils.

The price regained as tracking soybean prices recovered from a four-year low, driven by heavy rain across the US Midwest.

On Thursday, the price edged up before mid-day break driven by gains in overseas soy oil markets as investors anticipate an increase in demand from China in coming months. However, price had limited gains as the ringgit strengthened coupled with tracking late weak rival oil prices, which were mainly soybean and crude, causing the price fall.

On Friday, the price climbed as crude oil rebound off a 27-month low and recovering soybean prices, which climbed 1.7 per cent this week after two consecutive weeks of loses, however the strengthening ringgit restricted gains, according to Reuters.

According to weekly FCPO chart, the candlestick formed was a doji, indicating investors are waiting for clear signal with regards to the direction of the market.

According to the daily FCPO chart, on Monday, the price continued to bounce the top bollienger band from last Friday. The price sustained early losses due to low volume, and demand slowed, but was able to recover, closing below physiological level 2,200.

On Thursday, the price was pressured downwards towards the middle bollienger band at 2,120. As the price was unable to hold above resistance line 2,210, the price fell below support line 2,150.

However, this price was able to recover closing above. On Friday, the price continued to recover, and it continued to hover between the top and middle bollienger band.

According to the daily FCPO chart, next week the price could range between 2,120 and 2,250.

As the price was unable to break support line 2,150, this could lead to the price climbing again to test the top bollienger band at 2,250.

By observing the weekly FCPO chart, the price could test the middle bollienger band at 2,250.