Wednesday, February 8
You are at:Home»News»Sarawak»Singapore’s haze bill leaves oil palm industry in flutter
For the freshest news, join The Borneo Post's Telegram Channel and The Borneo Post on Newswav.

SINGAPORE: Singapore’s Transboundary Haze Pollution Bill which was passed last August will have a major implication on the palm oil industry in Malaysia as the island republic is a major hub for both trade and finance in the region. 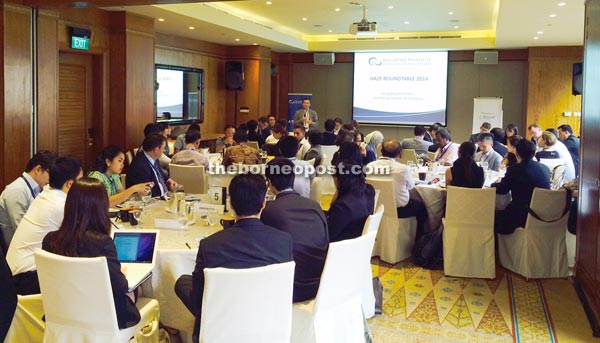 However, if the major players in Malaysia abide by the global guidelines of the Roundtable on Sustainable Palm Oil (RSPO), then it should not be duly worried.

“The possibility of our palm oil players is there and I am surprised that our government has not come up with any statement regarding the matter,” chairman of the Centre for Environment Technology and Development, Malaysia (CETDEM) Gurmit Singh told The Borneo Post here yesterday.

However, he was wondering how Singapore could implement the bill on transboundary haze as it would involve neighbouring nations.

“To my understanding, they could persecute us as long as we are having dealings in Singapore,” he stressed.

According to Singapore Institute of International Affairs (SIIA) deputy director Chua Chin Wei any palm oil company which contributed to the haze affecting Singapore is liable to be fined up to S$2 million.

“With this bill we want to be ready to take action when there is evidence. This includes extra territorial cases involving other countries as long as they have dealings with us, we can prosecute them,” he warned.

Research Fellow of the Centre of Excellence for Renewable Energy (CoERE) of Unimas Prof Dr Alexander Sayok opined that major oil palm players in Sarawak should be more careful now as Singapore is known for stern implementation of its laws.

“The issue is not just about contributing to haze problem in Singapore and be liable to be prosecuted there as this is a negative approach. Instead they must look at the sustainability of the industry,” he said.

Sayok pointed out that Sarawak palm oil companies must try to follow the rule set up by RSPO for their products to be accepted globally.

“Malaysia has come up with something similar in the hope that it can continue to sell its oil palm to India and China as both countries provide huge markets. But in the long run we must be sustainable in our approach as it is good for our own country as well,” said Prof Sayok.

“To me it could affect the palm oil players in Sarawak if they have dealings with Singapore through trade and finance. Otherwise, the bill will have no effect,” said Hon.

Meanwhile, Indonesia has been identified as the major contributor of haze affecting Singapore almost annually and many participants from there have voiced their concern that the bill would transgress their sovereignty.

“Just for Kalimantan alone some six (6) million hectares of land have been cleared for palm oil and this has caused major haze problems in Borneo Island,” said Dr David Gaveu of the Centre for International Forestry Research (CIFOR) based in Indonesia.

The one-day ‘Haze Roundtable 2014’ was organised by SIIA it was attended by some 60 participants from various sectors including NGOs from Singapore, Indonesia and Malaysia.