Thursday, January 21
You are at:Home»News»Sarawak»Bidayuh band Madeeh performs in Spain 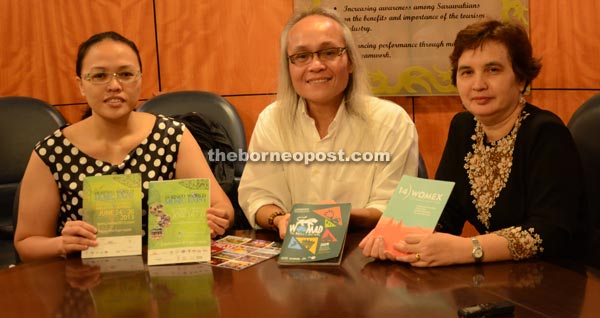 Arthur is flanked by Angelina (right) and Cynthia at the press conference.

Band leader Arthur Borman ‘Bai Kis’ Kanying said they were thrilled to be given the chance to share their music with the world.

“We had a lot of response and got positive remarks playing ancient musical instruments, which according to world music historians and experts, could have been in existence some 5,000 years ago,” he told a press conference at the Sarawak Tourism Board (STB) office yesterday.

“During the performances at Womex 2014 in Spain, the uniqueness of the instruments and sounds caught the attention of historians from the Natural History Museum in London.”

Arthur said records on the instruments from the early 20th century were held in the UK museum.

Originally from Kampung Annah Rais, Arthur said the band is proud to have gained attention for Sarawak through their cultural heritage.

He said the band’s name means cousins, relatives, brotherhood and sisterhood, with the latest member being his niece Cyntha Neng.

The band has since engaged French national Jean Herve Vidal – an expert in world and folk music globally — as their manager.

They now blend their traditional instrument with other world music without losing the original beats and rhythms.

“Our new manager Jean advised us on this and we were amazed that it works well,” said Arthur.

The mechanical engineer hopes to perform more locally and abroad.

“STB will continue to send Sarawakian traditional bands to local and world stages and we are ready to share what we have and at the same time our soothing traditional sounds and beats,” she said.