Monday, January 30
You are at:Home»World»Burma reforms ‘real but incomplete’, says Obama
For the freshest news, join The Borneo Post's Telegram Channel and The Borneo Post on Newswav.

US President Barack Obama stressed the importance of holding free, transparent, and inclusive elections in Burma in 2015 during a meeting with President Thein Sein on Thursday, while stating that he was “optimistic”. 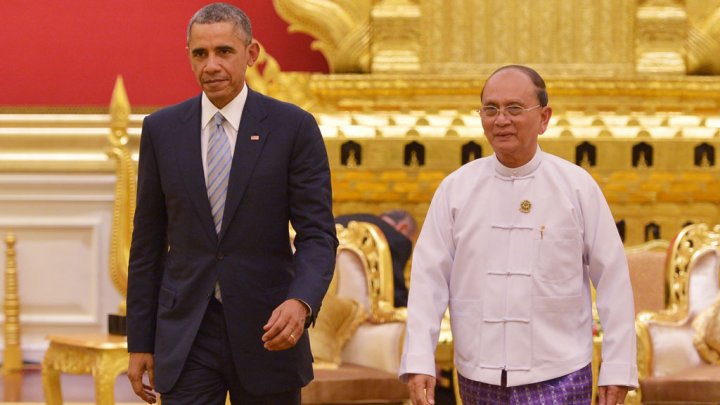 “The democratisation process in Myanmar [also known as Burma]is real,” Obama said at a joint press conference with Thein Sein. “But in our discussions we recognised that this process is still incomplete.”

Thein Sein said that the country was working to address some of the issues that concerned the US president, but added that the process would take time.

Obama arrived in Burma on Wednesday amid growing frustration over the Burmese military’s failure to follow through on its reform pledges, as well as criticism, in some circles, that the US president had made too many overtures to the long-isolated country too soon.

The visit is Obama’s second to Burma. During his historic November 2012 trip to the country, the first by a sitting US president, Obama announced US sanctions relief following Burma’s emergence from the “Bamboo Curtain” – a reference to the military’s extreme isolationist policies under the so-called “Burmese Way of Socialism,” which kept the country virtually hermetically sealed for decades.

But ahead of his most recent trip, Obama has voiced disappointment over the slow pace – and at times the backsliding – of reforms, as well as the continued human rights abuses against Burma’s minority Rohinga Muslim community.

“It is clear that President Barack Obama would have wanted to see a lot more change in Burma,” said FRANCE 24’s Philip Crowther, reporting from Washington.

In an exclusive interview with Thai-based Burmese magazine The Irrawaddy, Obama noted, “Even as there has been some progress on the political and economic fronts, in other areas there has been a slowdown and backsliding in reforms. In addition to restrictions on freedom of the press, we continue to see violations of basic human rights and abuses in the country’s ethnic areas, including reports of extrajudicial killings, rape and forced labour.”

Amid international concerns over the systemic human rights abuses against the Rohinga Muslims in the southeastern Rakhine State, Obama noted that, “much of the violence against the Rohingya and other Muslim communities in Rakhine State is being committed by local residents, but the government has a responsibility to work with the people to improve the humanitarian situation, and to address the underlying challenges.”

All eyes on Obama meeting with Aung San Suu Kyi

Obama’s comments about Burma’s upcoming elections come as the US closely monitors the situation in the country leading up to them.

The US is a vocal supporter of the Nobel laureate and longtime opposition leader and has explicitly aligned itself with a potential Suu Kyi candidacy, with the US Ambassador to Burma Derek Mitchell calling her inability to run for the presidency “strange.”

“She’s the one, whether in phone calls or in person, who gives the updates for the Obama administration in terms of how reforms are doing and whether they are really going anywhere,” said Crowther. “I think you could safely say the White House ideally might even want to see her in the presidency, but she is banned from that at this point,” said Crowther.

At the heart of Washington’s frustration with the Burmese military junta lies its failure to change the country’s existing constitution.

Drafted in 2008, the constitution stipulates that a quarter of the seats in parliament are reserved for the military, which has veto power over any constitutional changes. The constitution also bars any Burmese national with foreign family members from the presidency – a clause specifically targeted against Suu Kyi, whose sons have British nationalities.

Obama is set to meet with Suu Kyi in the economic capital of Yangon (formerly known as Rangoon) for talks on Friday.

“When President Barack Obama moves on from the capital to meet Aung San Syuu Kyi,” said Crowther, “he’ll also be meeting civil society groups and young people there and that’s when you’ll see more sincere thoughts about the reforms that are taking place – or not – from Obama.” -AFP

Previous Article‘Seat allocation in BN should be based on overall support’
Next Article 465 iklan perkhidmatan kesihatan dilulus sehingga Oktober: Subramaniam