Monday, July 4
You are at:Home»News»Sarawak»Motion moved to refer Violet to Committee of Privileges 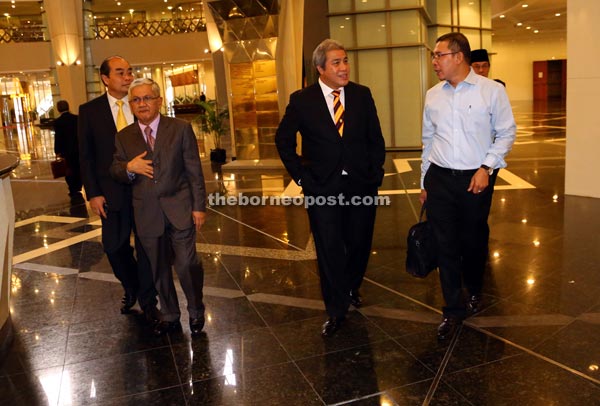 The Second Minister of Resource Planning and Environment’s motion, which was tabled after his winding-up speech, was seconded by Datuk Fatimah Abdullah (BN-Dalat).

State Legislative Assembly speaker Datuk Amar Mohamad Asfia Awang Nassar then asked Yong whether she would stand by or withdraw her words.

Instead of offering a reply, Yong asked Awang Tengah to make his stand on the Integrity Pledge made by the chief minister to uphold good governance, prompting the speaker to turn off her microphone.

Only after rounds of arguments did Yong finally say she would not take back what had been read out last Friday. She even dared the minister to take whatever action he could against her.

Four members of the opposition sought clarifications from Awang Tengah during his winding-up speech yesterday morning. One of the points raised by Chong even made Asfia lose his cool.

Instead of announcing his ruling in a calm manner, Asfia declared it in an extremely loud voice that caused Chong to back off.

Chong was asking Awang Tengah whether he had connections with companies engaged in illegal logging, which prompted Awang Tengah to ask Chong to substantiate the claim.

The disagreement escalated till Asfia demanded that Chong be clear with his question while Awang Tengah insisted that Chong substantiate his claim.

As Chong proceeded with his clarification, ignoring the instruction, his microphone was switched off. Asfia then decided: “You cannot subject a minister to a cross-examination. The minister can proceed.”

Earlier, Chong alleged that Awang Tengah was running away from answering a question he posed in the august house. The word ‘running away’ made Awang Tengah giggle and shrug off his request for clarification.

The minister then said he would not give the same written reply to the question that Chong had raised several times, to the point that he had to say “Why should you ask for the same written answer?”

‘Running away’ was later used again by Wong King Wei (DAP-Padungan) as he appealed to the minister for the floor. Asfia had to dismiss the term by pointing out that Awang Tengah was still physically present, inviting yet another giggle from the minister.

Christina Chiew (DAP-Batu Kawa) also got into the argument by pressing Awang Tengah on alienating state land to companies at zero premium.

However, David Wong (DAP-Pelawan) attempted to move a motion against Dr Annuar Rapaee (BN-Nangka) prior to Fatimah’s speech.

He did not get a chance to proceed as Asfia announced that government business should take precedence. The speaker also asked Wong to submit a written motion.

During a break, the DAP called for a press conference to elaborate on the disagreement. Yong also told a reporter that a verdict on the motion against her would come much later.