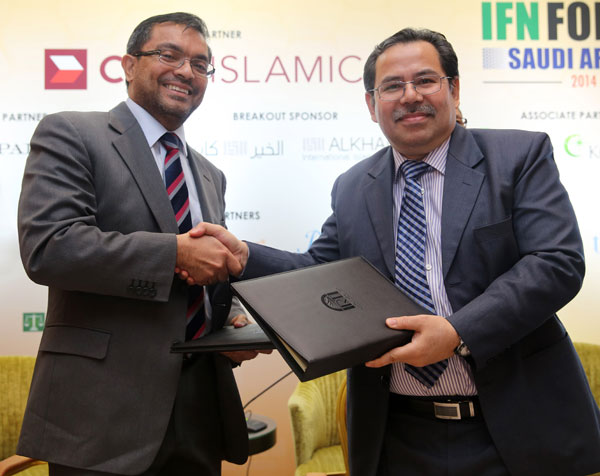 Ghani (left) is seen exchanging documents with Azmi Omar at a signing ceremony to produce IFCR on Malaysia and Indonesia.

KUCHING: In a joint effort to support the development of Islamic financial services industry, the Islamic Research & Training Institute (IRTI) of the Islamic Development Bank (IDB) Group, and CIMB Islamic Bank Bhd of Malaysia signed a memorandum of understanding towards developing Islamic Finance Country Reports (IFCR) on Malaysia and Indonesia.

According to a press statement, the IFCR is expected to provide in-depth information, and independent due diligence to facilitate the growth and development of the Islamic finance industry in IDB Group member countries and encourage investment by enhancing transparency.

He added IFCRs will provide the industry with valuable knowledge resources towards enhancing the Islamic finance industry and cater to the growing number of customers in the real economy through well-structured, sustainable and innovative products and services.

Meanwhile, Professor Dr Mohd Azmi Omar, director general of IRTI, said that the IFCR will analyse the success story of the Malaysian Islamic finance industry and provide the lessons learnt to other IDB member countries.

Through this combined initiative, the two institutions aim to facilitate access to information that is currently not available to stakeholders and thereby contribute to the growth and development of the Islamic finance industry.

Apart from helping to increase investor confidence, the reports will facilitate better understanding among regulators, market players, academicians, students and other stakeholders.

The upcoming IFCR for 2014 is dedicated to Malaysia, which is a leading international and regional hub for Islamic finance in the Asian region.

“Globally, with diversified Islamic financial products and services, consistent development in regulatory framework and enhanced international linkages are pushing the industry’s fast growth. Syariah-compliant assets worldwide are estimated to be in excess of US$1.7 trillion and growing at 15 to 20 per cent annually,” it said.

“With a predominantly Muslim population (240 million), Indonesia’s potential in this sector is yet to be fully exploited,” it said.

However, it noted, Islamic finance activities are gradually making inroads, which could help it tap the country’s large consumer base.

To note, IRTI, as the leading research institute in Islamic Economics and Finance is mandated by the IDB Group to inspire and deliver innovative research, capacity development, advisory and information services in the areas of Islamic finance and Islamic banking.