The cover of Ming’s just released album — ‘Love Is Not Around’.

MENTION Malaysian celebrities and the name Ming pops up.

Here is a multi-talented entertainer who not only hosts TV shows but also adds a touch of artistic and glossy flair to the mandarin entertainment world as a singer and actor.

His real name is Huang Qi Ming but he is known to his fans simply and endearingly as Ming.

What makes him special to his large following of admirers in Sarawak is that he hails from Balingian, a one-street town along the coast in central Sarawak.

Never in his wildest dreams had this small-town boy ever thought he would end up with a career in entertainment — he just wanted to grow up to be a businessman like his grocer father.

After his secondary education, he went for a marketing course in Kuala Lumpur but when the opportunity came knocking for him to perform a duet with Abin, an artiste from Penang, Ming seized upon it and together, they almost became an overnight sensation.

The duo called themselves The Island after Penang where they found the inspiration for their music.

They cut several albums — and their songs brought a new sound to the music scene of Malaysia at the turn of the millennium. 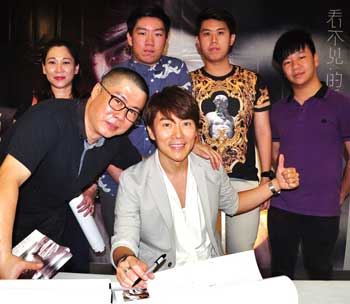 From then on, life for the kampung boy from Sarawak would never be the same again and for over the past one and a half decades, singer Ming went on to become a TV host before challenging himself in acting. He has now over a dozen of drama series and movies under his belt.

Today, Ming is back on the music scene, having just released an album in Taiwan titled Love Is Not Around. He was recently back in the state to promote this album.

Despite making it big in Asia’s showbiz, Ming is still every bit the humble Sarawak boy of those bygone days when he ran along the street of Balingian and played ping pong in school — a deep influence from his father.

Meeting up with thesundaypost for his album promotion, the affable showman said: “Sarawak is where my home is. I hold this dearly. I cherish my childhood days in Balingian and my teen years boarding at Catholic High School in Sibu.”

He recalled when he was a young boy, Balingian was just a riverine sleepy hollow — a town where it was even difficult to buy a magazine or a cassette, let alone a heart-throb pin-up.

Ming’s first stop on his album promotion tour was Miri.

“The moment I got off the plane, I immediately looked for kolok mee and Sarawak laksa. Being away for so many years, home food is what I miss. Yes, I am very Sarawakian at heart and we share good food and a colourful and pecaeful life,” he said.

After Miri, Ming touched down in Sibu — and yes, it was a beeline to eateries selling kampua noodles, dian bian hu (a Foochow rice-paste dish) and kompia.

“I also miss kacangma (a unique Sarawak chicken dish stewed with herbs, crushed ginger and cooking wine), nasi lemak, Malaysian curry and Sarawak durians when I am abroad,” he said. 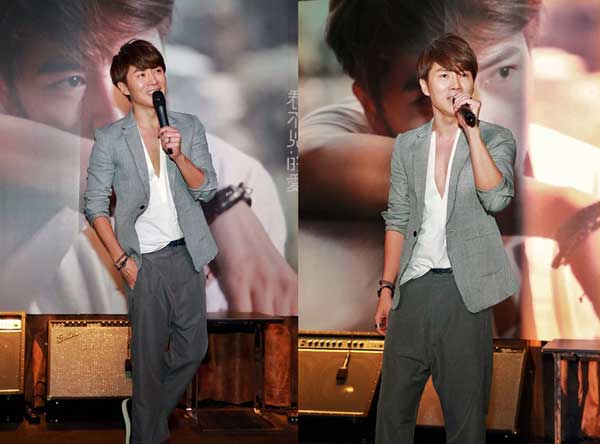 Ming sings on his album promotion tour in Taiwan.

Although Ming misses home food, he has found a stall in Taipei that serves something similar to Sibu kampua and dian bian hu – and he keeps returning to the stall.

According to him, Fuzhou is just across the strait, and there are Foochows from the mainland setting up foodstalls in Taiwan.

However, he pointed out they (Foochows) still missed the tastes of Sarawakian cuisine.

Ming had hoped to bring his latest album to his hometown Balingian and the other towns – Bintangor, Sarikei and Bintulu.

“Sadly, I didn’t have the time. I hope my fellow Sarawakians will share the inspiration and joy of my new album,” he said.

Ming cherishes his childhood days, growing up with children of other races — Dayaks, Malays and Melanaus.

He treasures the prevailing spirit of racial harmony among the various communities, saying such peaceful co-existence is what makes Sarawak special.

Ming left Balingian after primary six because there was no secondary school there.

“That began the next phase of growing up as a boarder at Catholic High School,” he remembered.

Ming said life as a boarder had helped him become independent.

At first he felt homesick and wept himself to sleep at night but later, after learning how to cook, wash and do everything himself, he was able to fend for himself.

“Boarding school helped toughen me up and make me self-reliant,” he said.

After that, Ming left for Kuala Lumpur and it was during his college years that he met the man – Adin — behind the creation of Island.

They spent the next four years singing duet but due to contract problems, Ming could not continue and left.

“But as fate would have it, a window of opportunity opened when the door to my singing career closed. So happily, I went into hosing NTV 7 shows and acting.”

Ming worked hard and his efforts paid off. He was nominated for Best Actor in the Golden Awards 2010 for his role in the movie — ‘The Thin Line’.

After a lapse of 14 years, he is back to singing. 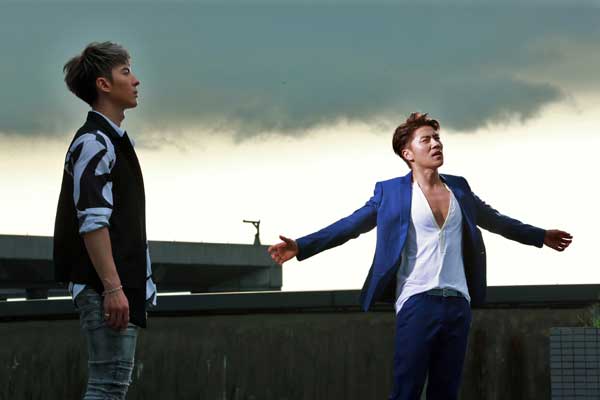 A clip from the MTV of ‘Not Shaken’ which Ming (right) performs with Andrew Tan (Chen Shi An) in his album.

“It’s every bit a Malaysian commitment even though the album was released in Taiwan. The songs were written and recorded mostly in Malaysia and I went to Taiwan for MTV shootings,” he said.

Ming is also marketing his album in Taiwan and China. He’s no stranger to both countries, having done promotions there when he was part of The Island duet.

Ming cut an EP (extended play) album four years ago and ‘Love Is Not Around’ is his first personal album.

Although the opportunity to release his first album came only after 14 years in the entertainment business, Ming believes it’s not too late.

He said he had faced challenges in every phase of his career and the release of his first album was just another touchstone along the journey.

“The response from my fans is overwhelming. I hope they love share this album of love songs and songs that strengthen friendship,” he enthused.

Ming said there was a song titled ‘Not Shaken’ in the album which he featured together with another popular Malaysian artiste Andrew Tan (Chen Shi An).

Ming is now in peninsular Malaysia promoting his ‘Love is Not Around’ album.

He will travel to Taiwan again and is looking forward to perform and shine in the Asian entertainment scene. 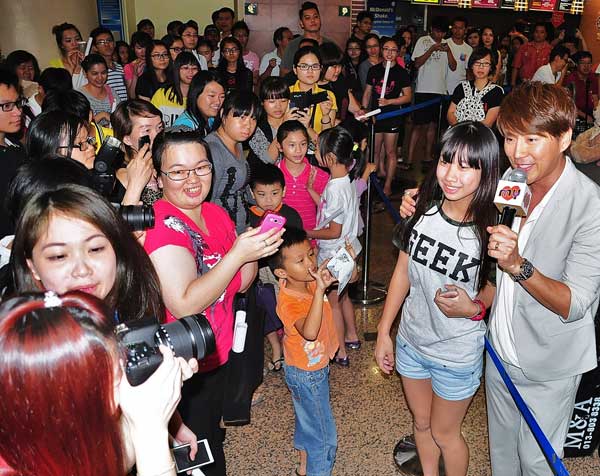 Photo call for Ming and his fans.