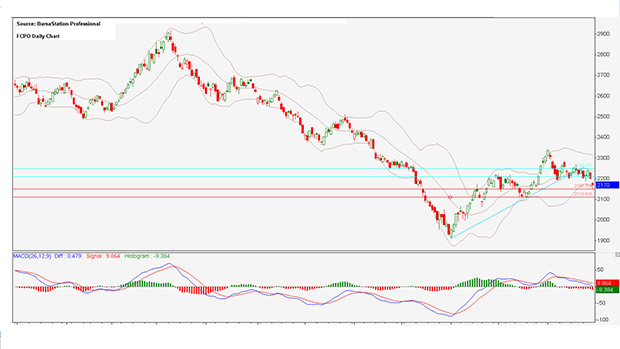 Cargo surveyor, Intertek Testing Services (ITS) reported that exports of Malaysian palm oil products during November 1 to 25 decreased 2.9 per cent to 1.103 million tonnes compared with 1.135 million tonnes during October 1 to 25.

In a separate report, Societe Generale de Surveillance (SGS) reported that Malaysia’s palm oil exports during November 1 to 25 decreased 3.3 per cent to 1.099 million tonnes compared with 1.137 million tonnes during October 1 to 25.

Demand from the European Union (EU) fell, while demand from China, India, and US had picked up.

Spot ringgit weakened on Friday to 3.3810, to near a five-year low.

This was due to the selling off of the currency by offshore funds, triggered by growing fears of lower oil prices which could damage the economy.

The Malaysian government announced that it plans to scrap fuel subsidies, in order to save the country RM20 billion a year.

The Malaysian Palm Oil Association (MPOA) estimated that crude palm oil production in November could increase 2.4 per cent during November 1 to 20 compared with the previous month.

Initially, the price fell, due to the strengthening ringgit pressuring the price lower.

The price continued to drop, near to a one month low, due to poor export data and the expectation of increase in crude palm oil output in November.

However, the price then climbed heavily, recuperating losses made in the earlier session.

The price continued to rise, due to investors technical buying and short covering, although weaker crude oil prices paired with a stronger ringgit limited gains.

The price then fell, due to falling crude oil prices, reaching their lowest level in four years, which increased worries that palm oil may lose its attractiveness as a bio-fuel.

By the end of the week, the price fell significantly, to a five-week low, due weakening in crude oil prices.

According to the daily FCPO chart, the price dropped, testing psychological level 2,200, closing above.

The price continued to fall, testing support line 2,190, while eventually closed above psychological level 2,200, as the price increased recovering losses made in earlier session.

The price then fell, testing psychological level 2,200, closing above.

These will be observed in the coming week.

ITS and SGS report on December 1 (Monday).