Monday, February 6
You are at:Home»Columns»Breaking Barriers»Doing the mundane but needful to bring about change
For the freshest news, join The Borneo Post's Telegram Channel and The Borneo Post on Newswav. 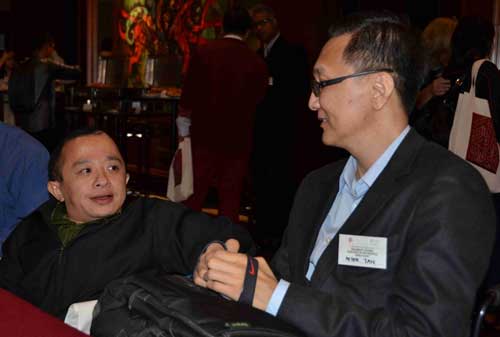 Sharing a light moment with Donald Law before the conference.

DONALD Law and I got acquainted at a conference on disability in Selangor six years ago. With him being in Kuching and I based in Kuala Lumpur, we did not get to meet often.

Over the years, we’ve bumped into each other several more times at similar events but seldom had the opportunity to talk other than the cursory hi-and-bye encounters.

The conference we attended in Kuching last week was different. Spread over three days, we had ample time to hold decent conversations.

While chatting after the conclusion of the second day’s proceedings, Donald told me, “When I first met you, your hair was all black. You were taking about accessibility issues.”

That got my attention.

“Now you have white hair,” he pointed to the sides of my head where grey has stealthily taken over, “I still hear you talking about the same issue.” Those were hard hitting words. Whether they were said in jest or not, it was the painful truth. Progress on accessibility in the built environment and public transport for disabled people has been moving at a snail’s pace.

When the first light rail transit system STAR LRT in Kuala Lumpur was completed in 1994, wheelchair users were barred from using the line as the rail operator said evacuation in the event of an emergency would be difficult.

That sparked outrage among wheelchair users who staged a street protest against the ruling, pointing out that none of the public transport at that time was accessible, making it difficult, if not impossible, to move around for those who do not have their own transport.

To add insult to injury, the government at that time concurred with the operator. Both the Minister and Deputy Minister of National Unity and Social Development were reported in the press to have said accommodating the needs of disabled people was not practical and that it would be expensive to include accessible facilities into the system respectively.

Subsequent to the protest, PUTRA LRT, the second light rail transit system announced provisions for disabled people had been incorporated into the design of all the stations and trains that were under construction then.

To date, PUTRA LRT remains the only fully accessible rail system in the country while facilities for STAR LRT and the KL Monorail (the other urban rail line built with accessible facilities) are being upgraded in phases.

History was to repeat itself 12 years later when disabled people were again ignored in the development of public transport system. Government-owned stage bus operator RapidKL announced the addition of 1,000 buses into the fleet in 2006 but none were accessible.

It took public protests and five years of negotiations and consultations to get the company to bring in 400 low floor buses fitted with restraining system for wheelchairs.

Even then, most bus stops do not comply with accessibility standards. They have yet to be upgraded and there are approximately 4,000 bus stops in the Klang Valley alone.

I shudder to think how long that is going take. As far as I can see, absolutely no effort has been put into upgrading any of them at the moment.

Advocacy for disability rights and equality is a long and tedious struggle. Imagine the amount of work that has gone into pushing for accessible public transport since 1994 and yet many of us are still nowhere near to being able to use it conveniently and safely.

Indeed, advocacy is like a deflated ball that needs to be kicked continuously in order to keep the momentum going.

Those of us who are committed to this endeavour know we have to be in this for the long run. We may not even get to experience the day when the built environment and public transport system becomes fully accessible in our lifetime.

Yet, we still soldier on with the realisation that if we do not do anything now, future generations will continue to suffer the fate we are experiencing now.

As most of the advocacy activities are concentrated in the Klang Valley, the slow changes happening are limited to that region only.

There is a lot more work that needs to be done with regards to access including education, employment, cultural life, and assistance in situations of risk and humanitarian emergencies and other rights recognised under the Persons with Disabilities Act 2008.

Therefore it is necessary for advocates in other parts of the country, especially in Sarawak and Sabah to join forces and elevate the disability rights movement to one that is genuinely cohesive and effective at the national level. We need to speak with one voice to be heard loud and clear.

Donald is right. Advocates like me have been talking about these issues so many times that we sound like broken records.

We have no other choice. We need to do whatever is necessary to keep the issues alive. Unless there are more effective ways of advancing our cause, we have to continue using the tried and tested ways of garnering attention and getting our rights respected. If we keep quiet, nothing will happen going by past records.

Having said that, the government, with its wide-ranging powers and resources, can play an active role in hastening the process of inclusion and full participation by enacting laws that prohibit discrimination or establish a commission to investigate and take punitive actions against those acts, including government agencies without fear or favour.

The question now is whether the government is serious enough in upholding the rights of disabled people by taking proactive actions or do disabled people have to continue pushing for inclusion by holding street protests every time we want to get our voices heard?

Donald, here is hoping we do not need to wait until I have a full head of white hair before we get to see meaningful changes.

I know how boring it has become having to hear me give presentations about the same issues every time we meet at conferences.

Unless and until the situation changes for the better, you will have to bear with me still.