Thursday, January 27
You are at:Home»News»Sarawak»Korean chefs in the making, only at UCSI 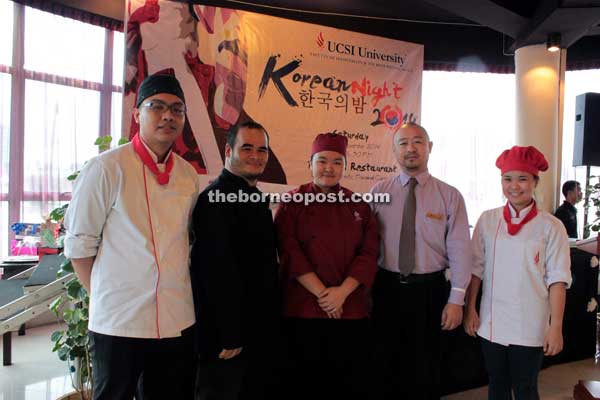 KUCHING: Getting bitten by the K-wave can lead to bigger things. For those looking to marry their obsession of all-things Korean with a career in the professional kitchen, here is Malaysia’s only Korean cuisine course right here at UCSI University Sarawak Campus.

According to Assoc Prof Dr Li Jianyao, Dean of the Faculty of Hospitality and Tourism Management, this was made possible via an agreement signed between UCSI and Korea Agro-Fisheries & Food Trade Corporation (AT) in 2013.

“We are the first to deliver Korean-focused courses. All our culinary lecturers are trained in Korea, and fully sponsored by the Korean government,” he told The Borneo Post in an interview leading up to UCSI’s annual Korean Night.

Dr Li said the event, which showcases Korean culture and food to locals, is part of the agreement with AT.

“The event is to experience Korean culture and cuisine. This is our second consecutive year. Last year was very successful.

“We invited the Korean ambassador to Malaysia to attend. This year we have more local guests.

“The purpose is to promote it to the local community.”

Culinary Arts Department Head Chef Joseph Pudun is one of those who spent time training in Korea to bring the culinary delights to Kuching and impart this to his students.

The course has had over 30 students since its introduction.

“The basic and intermediate students are working together for this dinner.

He singled out some of his students for exemplary work, praising Sherilyn Kueh Ching Ling from the basic class for her mastery in dumplings.

Both Kueh and intermediate student Carmen Jee Zia May were happy to gush about their love for all-things Korean that led them to specialise in the cuisine.

Jee said that she was very happy when the intermediate course became available just as she embarked on her second year.

Intermediate student Donny Lim Yun Ping said that awareness and availability of Korean cuisine in the local market had increased dramatically in the recent years.

“In previous years, the locals don’t know anything about the cuisine. The taste was foreign – spicy and sour.

“Now, after the K-wave invaded us, people have seen what kind of cuisine is available.”

Dr Li said that there will be an advanced Korean cuisine course waiting when the intermediate students finish their level.

“Our industrial partner is Doarea Korean BBQ, which will give our students opportunity for internship and employment.”