Monday, May 23
You are at:Home»News»Sarawak»A first for Malaysia – Dewi is Miss Talent at Miss World finals 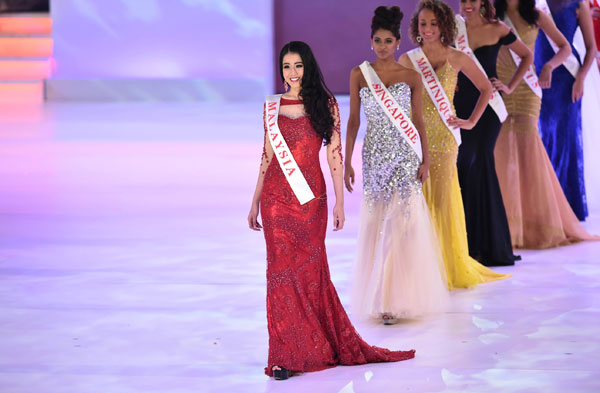 The 25-year-old Sarawakian wowed judges and the audience at Excel London ICC Auditorium as well as millions watching at home with her powerhouse vocals during a live ‘sing-off’ at the glitzy pageant with Miss Scotland Ellie McKeating, who also chose to showcase her talent with traditional gaelic vocals.

Dewi, a passionate classical opera singer, sang ‘Don Juan Triumphant’ from renowned musical ‘The Phantom of the Opera’, defeating McKeating and 120 other contestants from around the world.

“I chose to sing this song because I know it best compliments my talent. At the same time, it is also to show the love I have for classical music and showcase everything that I have learnt throughout my vocal class,” she told The Borneo Post when contacted yesterday.

Though Dewi emerged triumphant in this challenge, she admitted that she initially thought that McKeating would win Miss Talent.

“Miss Scotland was a strong competitor and the judges really did have a difficult time between the two of us. But fate was on my side, and I’m thankful for winning this for Malaysia.”

On her overall experience at the international beauty pageant, Dewi described it as surreal.

“I’ve always loved performing but to be able to do it in front of a world stage is truly remarkable and amazing.

“I can say that this experience will stay with me for as long as I live.

“I’m still trying to come to terms with everything but I’m truly happy. God made me win for a reason and that reason is to definitely inspire others with the gift of music,” said the down-to-earth lass who also made it to the Top 25 finalists at the finals.

The coveted title of Miss World 2014 went to Miss South Africa Rolene Strauss, a 22-year-old fourth-year medical student who was crowned by outgoing Miss World Megan Young of the Philippines.

Meanwhile, Bung Bratak Heritage Association president Dato Peter Minos said the Miss Talent won by Dewi Liana proved that Malaysia in fact has many talented people but, for various reasons, they are either not noticed or not given the chance to prove themselves or overlooked in shabby treatment.

Congratulating Dewi Liana for the win, he said the 25-year-old from Kampung Tematu near here, had shown to the world that she is very talented in singing in addition to modelling and dancing, and not merely a pretty face.

“Just like Pandelela Rinong from Kampung Jugan who won bronze in London Olympics in 2012, Dewi is making the Bidayuh community proud and happy by shining on the world stage.

“She is the pride of Sarawak and Malaysia,” said Minos, a former president of Dayak Bidayuh National Association (DBNA).