Thursday, April 15
You are at:Home»News»Nation»No need to declare disaster emergency – Council of Professors 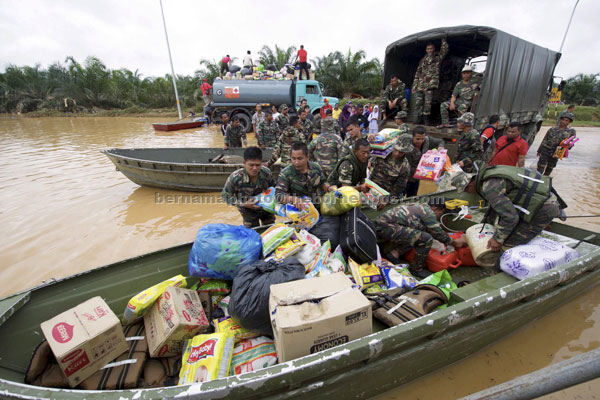 KUALA LUMPUR: The declaration of a disaster emergency for the nine states hit by the floods currently is not necessary as the government is still capable of controlling the situation.

“The government is still able to control the situation. As for now, the government does not have to issue certain orders, like using private properties for use as evacuation centres.

“As said by the Deputy Prime Minister (Tan Sri Muhyiddin Yassin), declare (disaster emergency) or not, we still have to safe the victims,” he said when contacted by Bernama here.

The floods which hit several states since middle of this month, namely Kelantan, Terengganu, Johor, Pahang, Perak, Kedah, Perlis, Negeri Sembilan and Selangor, has so far forced more than 130,000 people to be evacuated.

Nik Ahmad Kamal opined that the declaration of a disaster emergency due to flood state was only necessary if the government needed to take drastic action or issue certain directive or order immediately to address the situation.

Nik Ahmad Kamal, who is Malaysian International Islamic University (MIIU) legal adviser, said among measures that would be taken when a disaster emergency due to flood had been declared was the authorities taking over private properties, like houses and buildings, for use as evacuation centres or operations rooms.

“There is no need for that now, and even under adverse condition, the government can request and negotiate with the owners,” he added.

Based on records, the only time a disaster emergency because of floods was declared was in Jan 1971 when almost half of the federal capital was submerged and the flood situation in Sabah and Sarawak was also bad.

Meanwhile, a geostrategist, Associate Professor Dr Azmi Hassan said among the criteria which warranted the declaration of a disaster emergency due to flood was when aid could not be delivered to victims.

He said an emergency would also be declared if many of the flood victims refused to leave their home even when their houses were submerged in flood water.

“When a disaster emergency due to flood is declared, all directives issued by the authorities, especially the National Security Council, including to evacuate and also on the use of other assets, have to be abided,” he added. — Bernama