Monday, May 23
You are at:Home»News»Sarawak»Discover way of life in Sibu Cultural Heritage Museum 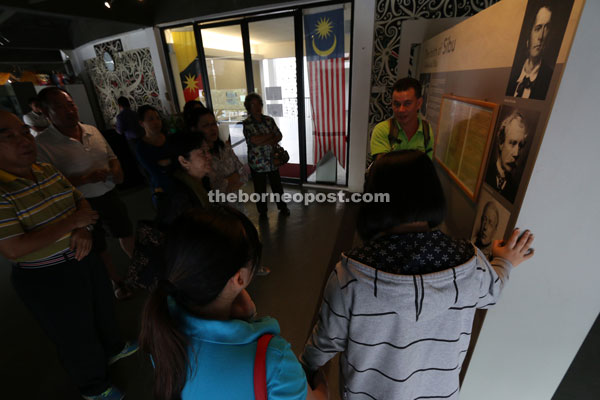 Visitors to the museum listen to a tour guide.

SIBU: The Sibu Cultural Heritage Museum is an ideal place for people to know in depth the history and lifestyle of Sibu people, museum assistant Joachim Tajul said.

Thus, he advised visitors not to come just to see the artefacts but to find out the way of life of the locals, like most foreign tourists do.

He described the museum building itself as a cultural heritage.

“It was formally used as the office of the Sibu Urban District Council, and later the Sibu Municipal Council,” he explained.

According to Joachim, the museum was originally sited at the basement of Sibu Civic Centre, but moved to the Sibu Heritage Centre in 2010.

“The new location is more strategic in that it is in the town centre,” he opined.

Joachim said September and October were the months the museum received the most visitors.

Currently, there are about 1,000 artefacts displayed at the museum and most of them were donated by the public.

Among the items were sewing machine parts, a suitcase, egg mixer, dressing table with chairs and gramophone.

Joachim said there were others who wanted to donate artefacts, but the museum had to consider whether to accept.

“Some did not write in any letter and we don’t know if those items are from the family.

“And we must consider the cultural and heritage aspect; we are a cultural museum, so our items must be related to culture and heritage, there must be history that we can trace,” he pointed out.

Admission to the museum is free. The opening hours are 9am to 5pm, Tuesday to Sunday.