Tuesday, July 5
You are at:Home»Columns»Nature Matters»Majesty, mystery and magic of mountains 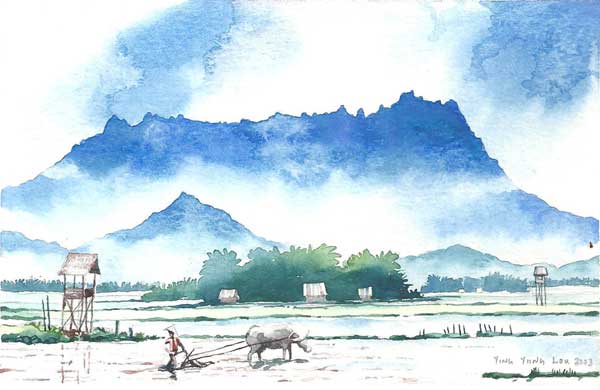 MOUNTAINS have inspired landscape artists, poets and explorers for many a century. The 14th century Italian poet Petrarch, on reaching the top of Mount Ventoux (windy mountain) in Provence, France on April 26, 1336, recorded these words: “At first, affected by the rare quality of the air and by the wide-spreading view, I stand as if I am stunned. I look about. Clouds lie far below … The summit is the ultimate goal, the terminus of the road on which we journey.”

Climbing a mountain is indeed a spiritual journey and Petrarch, on reaching the summit of Mount Ventoux at 1,912 metres, could well be acclaimed as the first European alpinist to record his thoughts. Today that mountain presents the toughest mountain climb in the Tour de France cycle race.

I shared Petrarch’s thoughts as I looked down on the marvels of the world below from Low’s Peak (4,101 metres) at the summit of Mount Kinabalu in even thinner air. I was able to climb that mountain that day because the mountain allowed me.

In previous years, it implied wait and I waited. Why? Such a large mountain, like many others, creates its own microclimate. The weather can change within minutes for the sheer mass of a mountain affects rainfall, temperature, wind directions and speeds and wind chill. Other particularly high mountains I have closely observed from an aircraft are Mount Kilimanjaro in Tanzania at 5,895 metres and Mount Everest at 8,848 metres. The latter is just over twice the height of Mount Kinabalu.

Each of these three mountains has its own tale to tell. However there are distinct similarities between the tales, especially those recalled by the indigenous folk who have occupied and farmed the lower slopes for centuries. The tales passed down from generation to generation generally relate to the respect needed for the mountain gods and spirits that dwell on the highest peaks.

Early Chinese traders called Mount Kinabalu Son San or God’s Mountain. It is even thought that the Kinabalu has a Chinese derivation: Kina (China) and balu — widow. This interpretation comes from a local legend, which tells of Chinese male explorers’ attempts to seize a massive pearl guarded by a fierce dragon with little success. It is more probable that nabalu hails from the indigenous Kadazan-Dusun meaning a big boulder containing spirits.

In the earliest 19th century attempts to climb Mount Kinabalu, the Dusun guides uttered prayers to warn the spirits that the adventurers were there to see and not to harm the mountain. Usually a rooster was slaughtered and seven eggs left to appease the spirits.

In my conversations with Kadazan-Dusun friends, they have recalled tales of the woes that have befallen climbers who damaged the vegetation or uttered obscenities whilst ascending or descending the mountain. The expletives that slipped my tongue upon descent no doubt were reflected in the agonising pains in both my knee joints.

Kilimanjaro, an extinct/dormant volcano, with only three peaks, is a standalone feature of the East African landscape protruding high above the savannah plains. Kibo is the highest peak with a snow-covered dome and an ever-shrinking glacier on its northern face. Mawenzi’s summit is jagged with plunging sides (not unlike Low’s Gully on Kinabalu) and Shira is the third peak.

There are various explanations as to how this mountain attained its name but the most likely one is derived from the Chagga tribe, who farmed the lower slopes for over three centuries. They refer to the mountain as ‘God’s almighty seat’ – the seat of God owing to the whiteness of the snow. Yet the Chagga people talk about ravines and caves occupied by mountain demons and evil spirits guarding treasures.

Mount Everest, straddling Nepal and Tibet, also has several names. Sagarmatha (Goddess of the Universe) in Nepal and Chomolungma (Goddess Mother of the Land) in Tibet. In both countries the indigenous Sherpas, now a small ethic group of only 23,000 people today, believe that near the summit of this mountain there is the goddess of inexhaustible giving, whose palace and courtyards welcome all. This goddess bears a bowl of food in one hand and a mongoose spitting jewels from its mouth in the other.

Everest climbers are encouraged to be blessed by the Buddhist monks at the Thyangboche monastery along the lead in trail to Base Camp. Before each morning’s work in laying or repositioning aluminium ladders across the crevasses of an icefall, all Sherpa climbers unfurl prayer flags and burn juniper twigs as offerings to the goddess for their daily safety.

Interestingly all indigenous people of these three mountains, as indeed mountaineers, refer to their respective mountains by the pronoun she in a similar way that sailors refer to their ships. Folklore again stresses the need for climbers to respect the spiritual needs of the gods whilst trying to reach the summit.

Climbing is undoubtedly inspired by a spiritual need for mind to overcome matter in mastering pain and exhaustion caused by a gradual decrease in oxygen as altitude increases. Seeing climbers suffer from altitude sickness above 3,000 metres is not a pretty sight. Upon reaching a summit, stop to admire and read the changing cloud patterns, feel the chill of the thinner atmosphere and in good visibility look down with wonder on the earth below. But never forget to thank all the spirits for getting you to the terminus of your journey. 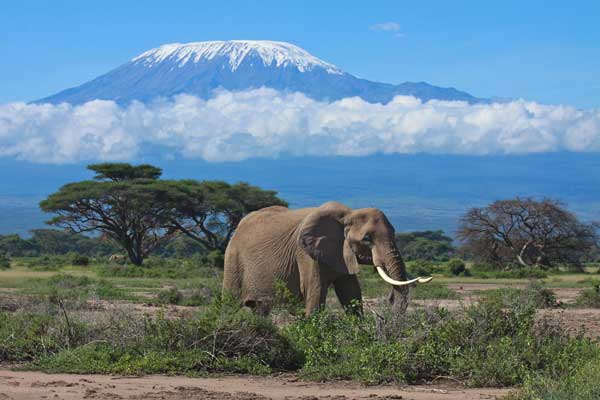 An elephant is seen with Mount Kilimanjaro in the background. 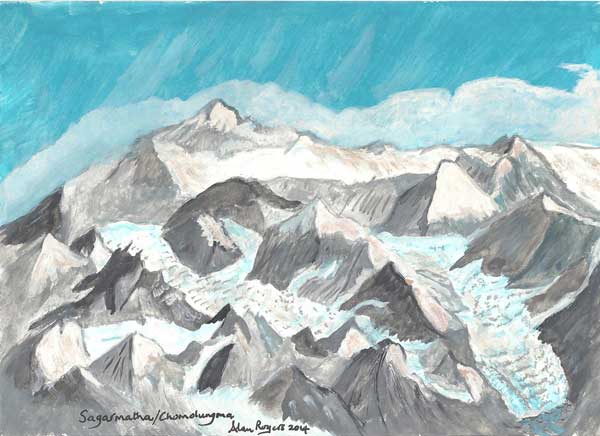