KUCHING: A petrol station in Bintulu was found to have violated its licence conditions under the Ministry of Domestic Trade, Cooperatives and Consumerism Act Section 21(1).

According to KPDNKK Sarawak deputy director and enforcement chief officer Abdul Hafidz A Rahim, the station failed to ensure that the fuel supply was sufficient and constantly available to its customers. 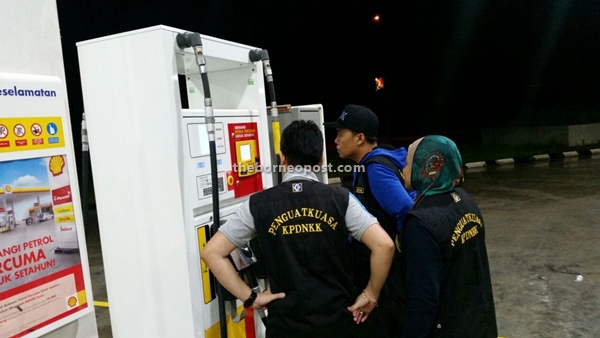 KPDNKK enforcement officers checking the fuel pump at one of the petrol stations during the operation.

“We will take stern action against this petrol station in Bintulu which deliberately did not place an order for more fuel despite exhausting its fuel supply since 3pm yesterday (Saturday).

“An investigation will be carried out and if found guilty, the maximum penalty for this offense is RM1 million or three months in prison,” he said in a press statement today.

Abdul Hafidz led the KPDNKK team on an operation to check and monitor petrol stations throughout Sarawak which started after 5pm on Saturday (Jan 31) following the announcement by Domestic Trade, Cooperatives and Consumerism Minister Datuk Seri Hasan Malek on the drop of fuel prices this month (Feb).

“In Sarawak, KPDNKK has conducted two simultaneous operations at state and branch-level namely ‘Ops Catut’ on Saturday followed by monitoring the adjustment of retail fuel price on Saturday night up till Sunday morning.

“This is to ensure that petrol stations abide by the new diesel and petrol prices announced by the government as of 12.01am on February 1,” he said.

He also pointed out that around 233 petrol stations throughout Sarawak were checked of which 99 were Shell, 84 Petronas, 12 Excel and 38 UMS (rural mini petrol stations which do not use any petrol brand).

“Based on these checks, we found all petrol stations in Sarawak complying with the new fuel prices for February 2015,” he remarked.

On Nov 21 last year, the government announced that from Dec 1 last year, it would fix the retail price of RON95 and diesel according to the controlled flotation method.