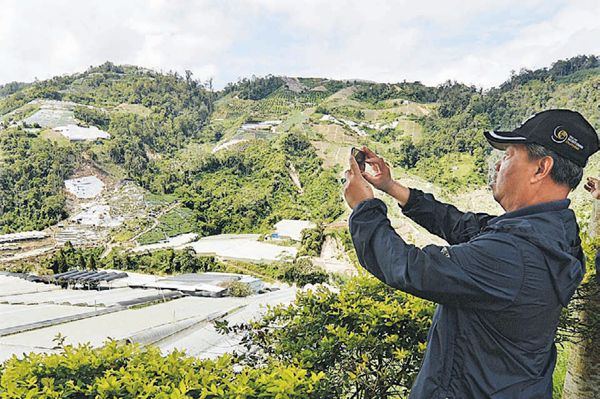 Muhyiddin taking a picture on the intrusion of agriculture land at Cameron Highlands. — Bernama photo

The Deputy Prime Minister said what was more worrying was that the culprits were blatantly challenging the authorities and if it continued, he did not know how long the highlands would last. “I am very upset.

When you look closer, some of the land covered in plastic is agriculture land which have been cleared even while enforcement is being carried out.

“I have been here two days and see Cameron Highlands severely damaged, and if no stern and effective action is taken, I do not know how long this area will last,” he said.

He was speaking to reporters after a surprise visit to Cameron Highlands to review the latest recovery development and inspection of the authorities following the floods and landslide at the holiday destination in November last year.

Muhyiddin, who is also chairman of the Special Committee on Flash Floods in Cameron Highlands, said a lthough more than 500 officers and staff from various departments and agencies were involved in the operations to clean up the land, he said these were not enough as the land-clearing was severe and had a worrying effect on the environment.

However, he said, the enforcement would be more effective by increasing the number of enforcers and equipment as well as implementing the law under the Land and Mines Department or the Forestry Department.

Muhyiddin said among the measures which could be implemented was creating permanent posts in the areas which had been identified as focal places for intrusion.

He said the matter would be decided after obtaining the views of Inspector-General of Police Tan Sri Khalid Abu Bakar and Armed Forces Chief Tan Sri Zulkifeli Mohd Zin as well as the Pahang state government at the next meeting of the Special Committee on the Flash Floods in Cameron Highlands.

This would ensure tighter monitoring was carried out to prevent further intrusions into the highlands, he said. To prevent future threats to the authorities, the deputy prime minister said he would be suggesting that the areas where these frequently happened be gazetted as security areas.

“This move must be further studied such as the need for a special force to patrol the areas from intrusions and preventing intruders from entering them,” he said. Asked if efforts to revert Cameron Highlands’ glory as a tourist attraction could be attained soon, Muhyiddin said he was not optimistic this could be done.

“At this stage, I am not optimistic, until the enforcement efforts against intrusions have been fully carried out,” he said.