Wednesday, December 7
You are at:Home»News»Sarawak»Get set for a sizzling weekend at Miri Country Music Fest 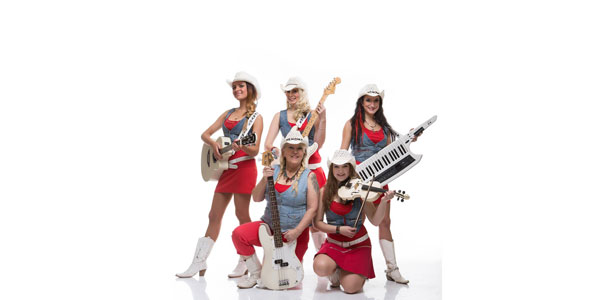 The Country Sisters from Czech Republic are among the many international artistes set to perform at the music festival in Miri.

The gates will open at noon to kick off the day’s programmes, which begin with the MCMF Bazaar.

Over 20 booths have been set up around the festival grounds, offering a wide selection of food and beverages, perfume, jewelry, souvenir items and handicrafts for festival goers.

Among the vendors are Helping Hands, a non-governmental organisation (NGO) helping the Penan community to improve their livelihood and Teach For Malaysia, another NGO that is championing equality in education.

Helping Hands will be selling handicrafts made by the Penan.

There will also be three music workshops scheduled to begin at 2pm. The first workshop is on Feel and Passion, followed by a Country Singing and Harmony and Country Sisters workshop.

All the music workshops will be held at Ruai Lounge and tickets are required for entry. A line dance workshop will also be held at 3pm for one hour at the Pavilion.

The music concert itself will begin at 5.30pm, with Starlet Band taking the stage as the first performer of the evening.

Starlet Band started out as a family band with three sisters and their niece, performing gigs at a social and recreational club in Miri.

After several shows at the club, the band was soon invited to play at other social functions and events.

To keep up with the growing number of invitations, the band recruited another family member and now Starlet is a five-piece band playing mainly rock tunes. Besides Miri, the band has also performed in other cities throughout the country.

Made up of self-taught musicians, Hi Breed is another household name in the local entertainment scene in Kuching city, spicing up wedding dinners and corporate events with their wide repertoire of country music.

Next up are The Country Sisters, who are also widely known back in the Czech Republic for their electrifying brand of country, rock and roll and Cajun tunes.

The six-piece band has performed in countries like Australia, Austria, Germany, Switzerland, Sweden, France, Singapore and Thailand, just to name a few. Their appearance at MCMF will be their first visit to Malaysia.

Since its formation about four decades ago, the band has released 14 CDs and won numerous awards for their performances.

Another veteran act in the country music scene are Mel and Joe from Singapore, who will be making their second appearance at the festival.

Since appearing as a guest performer at last year’s inaugural MCMF, they have established a strong following among local country music fans.

Both Mel and Joe have also promised another exciting show this time around, revealing that they will be bringing two other brothers to join them on stage this year.

To shake things up a little, MCMF will also include dangdut country music presented by Rani and Westom Country Band, who hail from Indonesia.

The band’s lead vocalist, Rani, has her own television programme back in Indonesia called Country Vaganza, which plays mainly – you guessed it – country music.

Malaysia’s very own Os Pombos from Kuala Lumpur have been described by fans as one of the pioneer entertainers in country music, having been in show biz for over two decades. The band takes pride in being the only country band to produce an album in 2003, of which three songs made it to the top 10 on the Radio 4 charts.

Rounding up the impressive list of performers is US-based singer Kareem Salama. Born and raised in a small town at the edge of Green Country in Oklahoma, Kareem grew up listening to country and bluegrass music, recording his debut album while he was still in school.

This festival is endorsed by Miri City Council and Malaysia Conventions and Exhibitions Bureau (MyCEB).

The event is also supported by the Sarawak Tourism Board and US Embassy.

Tickets to the festival are priced at RM80 each for adults, which include one free drink and RM40 each for children aged between 3 and 12 years old, entitling them to either one free soft drink or an ice cream. Tickets are available at the gate.

For more details on the event, logon to www.miricountrymusic.com.