Saturday, August 13
You are at:Home»News»Sarawak»220 belian logs seized in Kapit on CNY eve 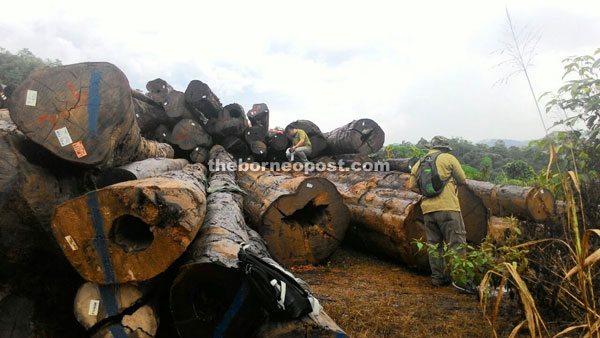 SFC personnel documenting the belian logs found at the side of a logging road at Amang.

KAPIT: A total of 220 illegal belian logs was seized by Sarawak Forestry Corporation (SFC) Kapit and Sibu offices, following a compliance operation on the eve of Chinese New Year on Wednesday.

The logs, of various sizes with a volume of about 440 cubic metres, were found without property or royalty marks by the side of a logging road at Amang, approximately 1 km from the Kapit-Mujong road. The area is not within any licensed area and the logging road is used by both logging companies and the local communities. The illegal logs are estimated to be worth RM440,000.

“This is the second illegal logging case in Kapit within the last month or so. Our commitment to combat illegal logging is strong; there is no let-up, not even on the eve of Chinese New Year,” said a statement from SFC chief executive officer’s office.

A police report has been lodged and the detained logs will be handed over to State Forest Department for further investigation. This case is an offence under Section 85 (1) of the Forest Ordinance, 1958.

Previous ArticleNancy: Provision against secession in Sedition Act should apply to all states
Next Article Partners in crime arrested for motorcycle theft