Sunday, October 17
You are at:Home»Columns»Breaking Barriers»The city that tin built 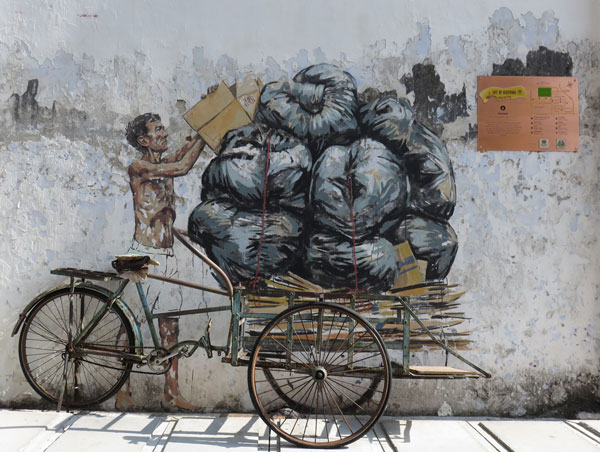 SINCE we got married, my wife Wuan and I have always celebrated Chinese New Year at her hometown in Ipoh. We would drive up from Kuala Lumpur to spend a few days with her family. This year it was with her mother and elder sister after her father passed away last year. We went on Tuesday, two days earlier, to avoid the traffic jam that is common during major festive seasons.

The two-hour journey on the North-South Expressway was invariably monotonous with wide expanses of oil palm and rubber tree plantations dominating the landscape most of the way. Halfway through, I became drowsy, most probably caused by long stretches of unexciting terrain.

We decided to get off the expressway and take the Federal Route 1 – or more fondly known as the Old Trunk Road – for a change. It was the main artery that connected most of the major towns along the western part of the peninsula until the tolled expressway was constructed in the 1980s.

Driving became a little more dangerous though. Narrow roads without median separation of opposing traffic increased the risks of head-on collisions. Because of the danger, I drove more carefully which was just fine as we were not rushing for time anyway.

The detour through the rural heartland added another hour to our trip but was well worth it. We got to enjoy interesting sights not normally found in the big city. In between towns, fruit smallholdings, quaint Malay kampong houses on stilts, small townships, roadside stalls selling local produce and people going about their activities gave us a warm sense of civilisation unlike the rather detached feeling we had from driving through the expressway.

We also learnt the names of places we have never ever heard of. The unhurried pace in these smaller towns fascinated us, considering that we are near retirement age and are looking to settle down in a place with a more leisurely lifestyle.

We arrived in Ipoh expecting it to be a hive of activity but the city was unusually quiet. Perhaps the murmurings about the poor state of the economy nationwide were true after all. The food court we had our dinner was less than half full. The car parks at the hotel we were staying were mostly empty when it was difficult to get choice parking spots in the past.

Ipoh was the city that tin mining built. From a mere settlement surrounded by thick jungles and limestone hills in the Kinta Valley, it catapulted into unprecedented economic growth when what was probably the world’s richest alluvial tin deposit was discovered in the valley in 1876.

During the tin mining boom in the early 20th century, many immigrants from China struck it rich working the mines and providing support services to the industry. It is no wonder Ipoh was known as the ‘City of Millionaires’ in its heyday.

The city lost some of its lustre when the tin market collapsed in the late-1970s. The downturn not affected only tin miners but the general economy of the entire Kinta Valley. Many lost their jobs and had to venture elsewhere to find work.

But the resilience of the city saw it weathering through the crisis and grew to become a major tourist destination and food paradise. The limestone hills are home to several popular cave temples that are popular with tourists and locals alike. We passed by some of these temples which are close by to the Old Trunk Road.

The many times that we were in Ipoh, we never thought of soaking in the charms the city has to offer. We made it a point to do it differently this year and woke up early the following morning with the intention of hitting the trail of seven wall murals done by Lithuanian artist Ernest Zacharevic in various parts of Ipoh’s Old Town.

Being the eve of the Chinese New Year, many business and food establishments were closed. The few coffee shops that were still opened in that area did a roaring business with long queues of patrons waiting for tables. It also meant that the streets were deserted, which made is easier for us to gallivant all over in our hunt for those artistic pieces.

We spent a good two hours crisscrossing the Old Town hunting down the murals one by one. The ones we found impressive were the old man sipping coffee and tin mining. The mural of the old man stirred up controversy in December last year.

A Malay daily reported several people claiming it resembled the portrait of the late Communist Party of Malaya secretary-general Chin Peng. The allegation was refuted by the Ipoh City Council, which also denied rumours the mural would be repainted.

The tin mining mural christened Evolution was aptly situated in Jalan Bijeh Timah. Done in Chinese brush painting style, it depicted the industry that put Ipoh on the world map, which sadly has become a part of history now.

Nevertheless, I am glad that we spent time exploring the Old Town. With Wuan as the tour guide, I got a better insight into the city where she grew up in. Other than the murals, I got educated on the various landmarks that were built during the British colonial era like the beautiful railway station, town hall and court house. All three buildings were situated just a stone’s throw away from each other.

“We should explore more of the city next year,” I told Wuan.

She nodded in agreement.

Previous ArticleDeretan peluang terlepas
Next Article Which way do we face?