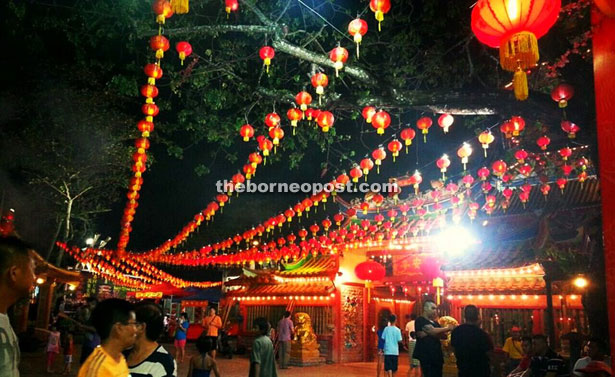 The festive air amidst the red lanterns at the outer court of Tua Pek Kong Temple.

SIBU: The popularity of Sibu’s Tua Pek Kong Temple has travelled far, drawing visitors from thousands of miles away, including from China, Taiwan and neighbouring Southeast Asian countries.

This is a true account of the temple’s reputation after words spread around that wishes through sincere prayers and offerings in the temple came true.

Foreigners have therefore flocked into this reputable 150-year-old temple, built during the time of Rajah James Brooke, silently helping to promote Sibu as a religious tourism destination.

“Whenever visitors are in town, locals will tell them about the temple, and these guests have entered the court to burn incense and offer prayers. As time goes by, more foreigners come; some have even returned to offer thanksgiving after their prayers were answered.”

He pointed out that folks here were hospitable, adding they had been actively hosting international clan and association events.

“This has given them ample opportunities to introduce Sibu to their clan members from around the globe, and Tua Pek Kong Temple has often been a favourite subject because of its rich cultural history.”

He said he had even heard of officials from the People’s Republic of China getting promoted after they prayed at the temple, plus other touching testimonies of how Tua Pek Kong had blessed the visitors.

“The temple has pulled in hearts together, and these are warm stories that connect the locals with the visitors. This has helped to promote the hospitality of Sibu.”

Not only had it drawn in foreign worshippers, the temple had also attracted foreign scholars to study the culture of Tua Pek Kong worship in Southeast Asia, he added.

Just last month, a visitor from Chengdu in China returned to offer thanksgiving at the temple.

Met by a reporter, Wang Yun in his 30s, managing director of a travel agent, related that he was brought by a local to the temple to pray while on a business trip here beginning of last year.

After returning to China, he said his business operation became smooth and business volume multiplied.

The businessman vowed he would visit Eng Ang Teng Temple whenever he returned to Sibu, and because of this encounter, Wang said Sibu held a special place in his heart.

Meanwhile, the temple continued to draw large crowds during the Chinese New Year, beginning with its eve, as worshippers came to offer thanksgiving and seek favours and blessings for the new year.

Soon said the crowd was larger this year.

“From the record of our joss sticks distribution on the eve and on the first day of the Chinese New Year, there was a larger crowd by at least 30 per cent.”

During their visits, he said worshippers would burn incense and paper money while some also offered fruits and food.

He thanked the thousands of visitors for cooperating with temple workers to ensure a smooth celebration.

Worshippers flocked to the temple after their reunion dinner on Chinese New Year Eve, and more came at midnight to usher in the Year of the Goat.

Offerings were first made at the temple court for Jade Emperor deity before worshippers entered the court to offer thanksgiving to Tua Pek Kong. 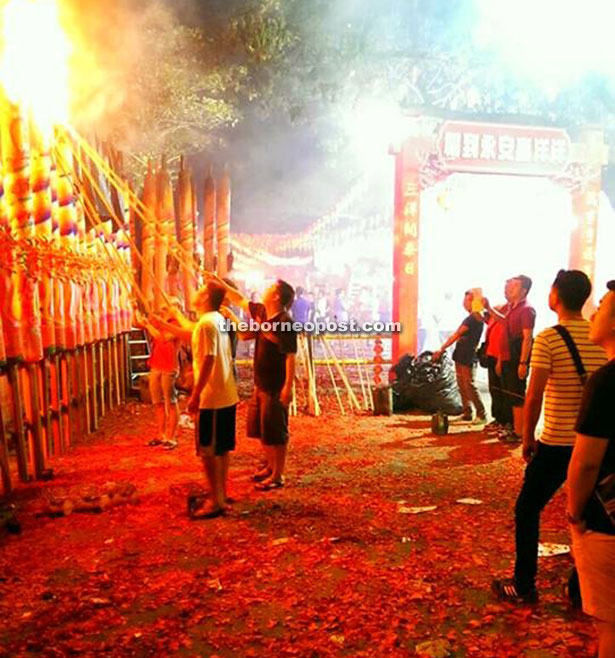 More youths are turning up for worship. This will help the culture of folk worship to be passed on. Picture shows youths lighting giant dragon incense. 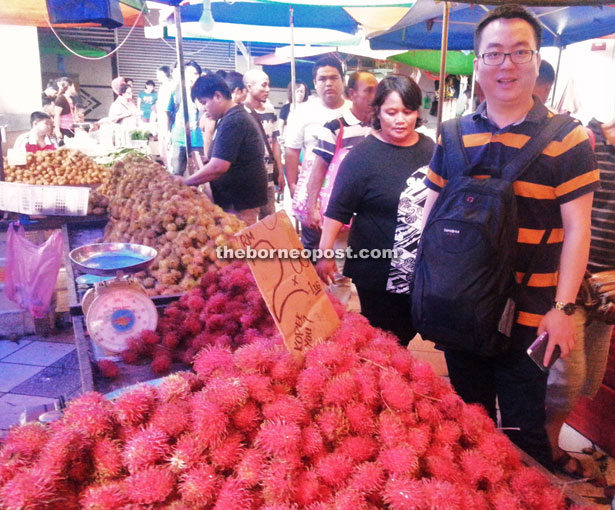 Apart from offering thanksgiving at the temple, Wang Yun is also marvelled by the tropical fruits at the market. He says this is his first time seeing rambutan fruits. He reckons tropical fruits should be a tourism selling point. Wang loves the taste of rambutan. 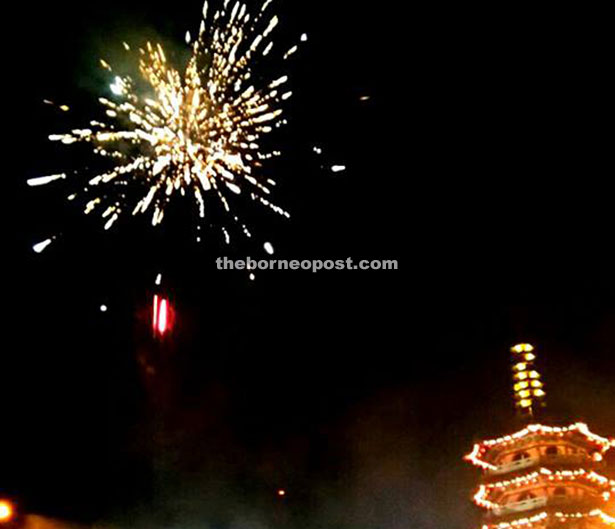 The night sky bursts into colours as the temple ushers in the Year of the Goat.