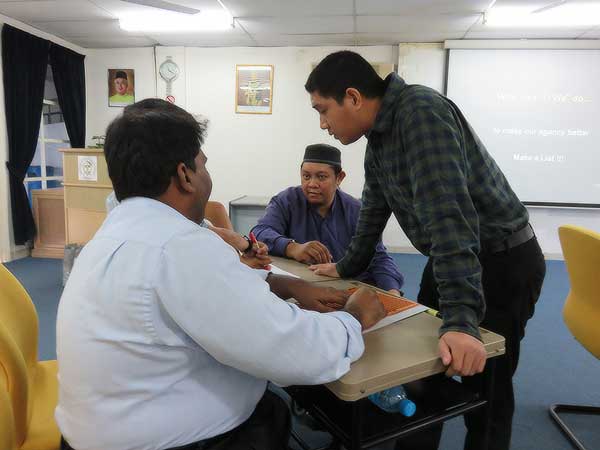 WHO would have known taking the wrong medicine could lead to dire consequences? That was exactly what happened to Muhamad Nadhir Abdul Nasir. I had the opportunity to listen to him share this tragic episode and also his life story one evening recently.

“I had a fever when I was nine years old,” he recounted. “My father brought me to a clinic for treatment. I took the medicine when we got home.”

His condition became worse. On top of that, his skin began to peel off. In a state of panic, his parents brought him to a government hospital.

He did not get any better after being warded for two weeks. That was when his father decided to transfer him to a private hospital where he fell into a coma. When he regained consciousness three weeks later, he had lost vision in both eyes. The medicine the doctor in the clinic prescribed to him had triggered the Stevens-Johnson Syndrome, a rare and life-threatening disorder of the skin and mucous membranes.

“It damaged all my internal organs and my eyes. I was told in that same year another person had died from the same condition. Although I had become blind, I felt I was given a second chance.” He is the third of six siblings. He stopped going to school and stayed home, spending most of his time playing with his brothers and sisters after he was declared legally blind in April 2000.

“I remember I was very bored. Two months later, my mother enrolled me into the Sekolah Kebangsaan Pendidikan Khas (SKPK) Princess Elizabeth in Johor.” It is the first residential school for the blind in Malaysia. Nadhir’s primary schooling was uneventful as he learned Braille and new skills to help him cope in school and his daily activities.

However, he faced problems when he entered secondary school at Maktab Sultan Abu Bakar in Johor Bahru. The college has an integrated programme where blind students studied together in the same classrooms with other sighted students.

“I could adapt to the new environment but sometimes the teachers did not have the skills to teach disabled students. One time in the mathematics class, the teacher told me I could not use my Braille typewriter because it was too loud and was disturbing the other students.

“Because of that, I could not take notes or do my exercises. When I asked the sighted classmate who was sitting beside me what was being written on the whiteboard, the teacher asked me to please not talk during her class.”

Therefore, it was no surprise he failed all the mathematics tests for that entire year.

“When I was in Form 2, the teacher was understanding and I did very well. The next year, I got the same teacher who taught me in Form 1 and I again failed all my mathematics tests. Thankfully, I passed with a ‘D’ in mathematics for PMR.”  Nadhir,  is 24 now  and has just graduated with a bachelor’s degree in anthropology and sociology from the University of Malaya.

“My mother always tells me, ‘I never treat you as disabled. You are as normal as other children.’

“She kept pushing me until I achieved what I’ve achieved today. My mother trained me and shaped me to be a better person and also to be role model to my other siblings.” Nadhir is considering furthering his studies. “I am really interested in doing disability studies. As no university in Malaysia is currently offering this I will have to go to the United Kingdom, Australia or Japan.

“If there is an opportunity for me, I will go. Applying is one thing. The other thing is the financing to support my studies. But I have the other option of doing a Master’s degree in public policy specialising in disability policy in a local university.”

As far as his future is concerned, he is clear on the direction he wants to proceed.

At the same time, he is of the view that access to education and employment for disabled people should not be limited to the few common disciplines, for example, the blind are usually encouraged to take social science or Islamic studies.

“I am a very optimistic person. Even when a person is blind, he can also become an architect or mechanical engineer given the right support and facilities.”

Having gone through disability personally and understood how his friends with visual impairments have to struggle with the same problems, he is determined to tackle the prejudiced perceptions towards disabled people in any way he can. What drives him is not the need to only help himself but to improve the well-being of others as well. He aims to make society a better place so other people and the next generation do not have to face the same problems he contends with now.

He attended a Disability Equality Trainer’s course earlier this year and plans to use the knowledge and skills he gained to formulate more effective ways to achieve that end. Following his certification as a trainer, he set up a company called Inclusionist Steps to offer training, consultancy and research on disability-related matters.

For parents with disabled children, he advises them to not doubt their children’s capabilities and potential.

“Please do not restrict their access to education because believe me, we can do it. Disabled children too can succeed in education.

“As for all disabled people and my disabled friends out there, even though there are barriers in society, the most important thing is to empower ourselves, not just in gaining knowledge or vocational abilities but also in terms of decision-making and our philosophy of life.”

Wise words those.  To say I was impressed with Nadhir is an understatement. Indeed, he has come a long way from that day 15 years ago when he woke up from the coma and discovered he had lost his sight. It is a rarity for me to meet someone as young as him who can talk about disability issues with such passion and profundity.

The one hour we spent chatting where he opened up his life to me is much appreciated. I hope more young disabled people will take up the advocacy mantle like what he is doing. The future can only be better if we are willing to work hard to improve the present.