Monday, February 6
You are at:Home»Business»Sheda hosts first Home and Property Roadshow 2015
For the freshest news, join The Borneo Post's Telegram Channel and The Borneo Post on Newswav. 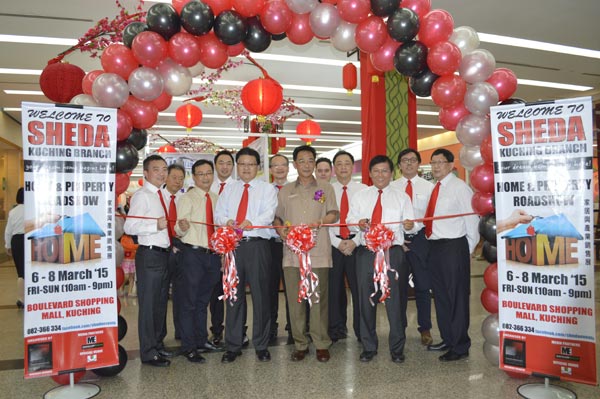 He also believed that there is a growing demand for residential properties, given Sarawak’s economy which has spurred a rapid growth of housing estates throughout the state.

On the implementation of the goods and services tax (GST) next month, Abdul Karim noted that while the increment in property prices is expected, the hike will likely not be very significant.

Concurring this, Sheda Kuching branch chairman and organising chairman of Sheda Home and Property Roadshow 2015, Dr Christopher Ngui said, “It is reckoned that house prices are on an uptrend due to annual inflation, increasing land prices, labour and building materials costs, rural-urban migration, and population growth.”

“To assist that majority group of house buyers at the said affordable price range, we hope the government can assist the developers by increasing the density and reducing the compliance costs and others in order to be sustainable.”

He also urged interested parties to purchase their dream homes or properties now rather than later.

Wong noted that with GST coming into play, prices of raw materials will be taxed at six per cent and interested parties can check which taxed raw materials on the Customs website.

On the roadshow, 60 booths have been taken up with over 50 exhibitors from Sarawak, Peninsular Malaysia, and foreign developers. There are also exhibitors from the oil palm land investment scheme and building related trades.

Sheda has also assigned a booth to a non-government organisation (NGO); Pibakat, to create awareness of their plight and activities to the general public. Sheda noted that more booths will be given out to other NGOs in the future.

The second Sheda Home and Property Roadshow 2015, Kuching, is scheduled to be held on November 27 to 29, 2015, at Boulevard Shopping Mall, Kuching.

Of note, this is also the first roadshow by Sheda Kuching branch, after the formation of Sheda branches during the last quarter of 2014.