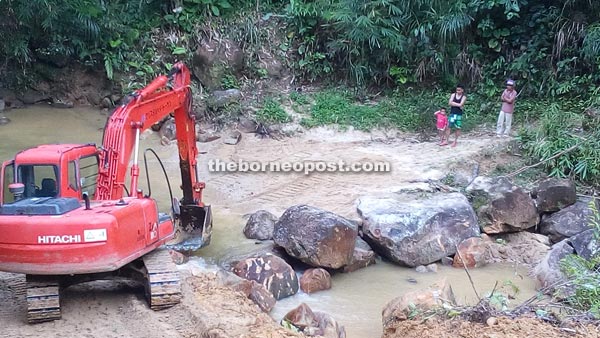 A March 3 file photo of ongoing works to build the temporary access road. 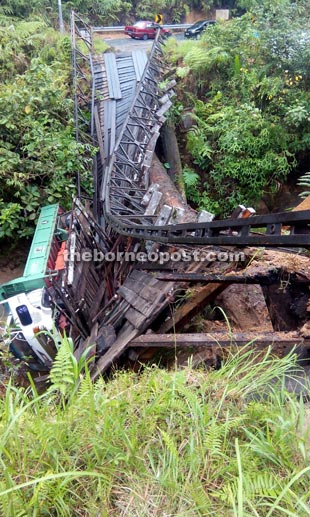 A March 2 file photo of the bridge when it collapsed.

KUCHING: Residents from the four villages of Kampung Sadir, Kampung Simuti, Kampung Sibuang, and Kampung Sibakar are not pleased with the work progress of building the access road which is a temporary alternative crossing to the collapsed bridge across Sungai Piin Bireh in Ulu Padawan.

Kampung Sadir headman Tom Karak Bakong, who described the progress as less than satisfactory, said many also shared his feeling and they urged the authorities to speed up work because they need to get on with their everyday business with more ease.

He claimed that even the materials being used to construct the temporary access road were not according to specifications discussed earlier, and he worried this could result in the road to be easily flooded by the river if there is continuous rainfall.

“We need a more reliable access road, but then there is not much progress even after a week work has started. Its current condition makes it very difficult for especially small vehicles to go up and down the steep road.

“I hope they buck up. To them, this is maybe a small matter, but to us the five villages and also a primary school across the river, we really need a good temporary access road while waiting for the new bridge to be completed,” said Tom who was at his farm when contacted yesterday.

The wooden bridge across Sungai Piin Bireh collapsed on morning of March 2 under the weight of an overloaded lorry carrying sand, causing about 2,000 people from the four villages to be cut off and stranded. Also affected was a primary boarding school SK St Bernard Sadir which has 120 pupils.

Minister of Infrastructure Development and Communications Dato Sri Michael Manyin Jawong had visited the collapsed bridge on March 3 and he had announced that a new bridge costing at least RM500,000 would be completed in about a month’s time.

Previous ArticleKampung Siwak Jaya villagers want action on eroded roads
Next Article Mums, dads to be honoured on May 10