Sunday, May 22
You are at:Home»News»Sarawak»‘Set up unit to coordinate heritage conservation’ 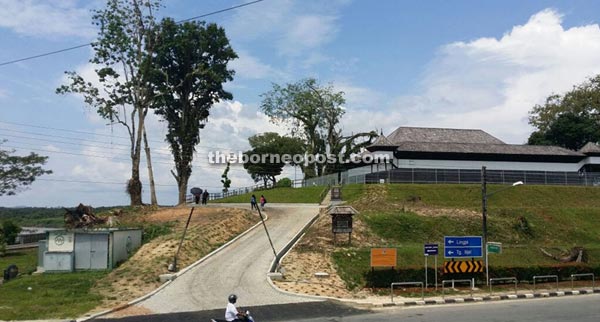 Fort Alice now stands stark, exposed and unnatural after the felling of trees.

The scene of destruction.

What it used to look like with the landscape intact.

KUCHING: The Sarawak Heritage Society (SHS) is renewing its call for the state government to set up a specialised heritage unit to coordinate a multi-agency approach to heritage conservation in the State.

Its president Karen Shepherd said existing ordinances that govern protection of the state’s antiquities and cultural heritage were outdated and rarely enforced.

“It’s time for a complete overhaul,” she said in a press statement yesterday.

SHS was adding its voice to the cries of outrage over the wanton felling of trees at the heritage site of Fort Alice in Sri Aman.

Shepherd said 11 of the 13 trees at the site were cut in what was suggested in earlier reports as a ‘miscommunication between departments’ but later revealed as a ‘collective decision’ by Sarawak Museum representatives and the Resident’s Office in Sri Aman.

“It has come to light that the recommendations of the lead conservation architect on the project, Mike Boon, were disregarded,” she said, adding that Boon had asked for one particular tree to be felled for the protection of the public, and the others to be trimmed.

“These recommendations were countermanded by the felling of almost all the trees on the site except the one identified by Boon.”

She pointed to common practice outside Malaysia and within, notably in Penang and Malacca, where a specialised heritage unit was established to coordinate heritage policy and protection.

SHS is urging the chief minister to send a clear message to his various departments that the preservation of the State’s heritage is a priority by instating a heritage unit tasked with protection and given the teeth to function.

The tree carnage sparked shock and dismay in the local community, who took to social media to express their horror.

In Sarawak, protection of heritage sites falls under the purview of the Sarawak Museum. The Sarawak Cultural Heritage Ordinance (1993) provides that ‘the director in charge of heritage is empowered to determine the limits of historical monuments or historical sites (Section 21.2)’.

Felling of trees on land that is part of a historical site or in its immediate neighbourhood requires permission of an authority entrusted with heritage management (Sect. 22).’

“The Museum has an enormous range of roles to play and it is unrealistic to expect them to co-ordinate and supervise the number of agencies that heritage protection involves. Even worse, how can we expect the Museum to oversee enforcement? It is simply not their area of expertise.”

“How can we leave such significant decisions involving a RM5 million project and the heritage of an entire community to the whim of a handful of workers in the Resident’s Office of Sri Aman? The damage done to the setting of this historic site will not be put right for decades.”

These events in Sri Aman highlight a breakdown in the system, she added.

She went on to say that a similar state of affairs allowed the renovation of the summerhouse in the Museum Gardens that stripped it of key heritage features in another case of ‘one hand not knowing what the other was doing.’