Saturday, October 1
You are at:Home»News»Sarawak»Game for a walk at Piasau Nature Reserve? 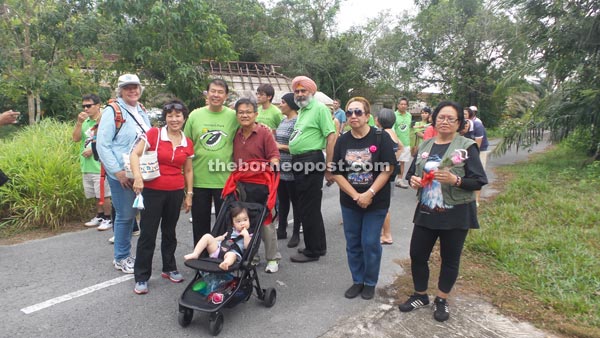 Ting (third left) and other participants of the walk have their photo taken near one of the houses that is being demolished.

MIRI: Today is the 21st time that the Hornbill Walk is being held at Piasau Nature Reserve to encourage people to appreciate nature and the environment.

It also enables Mirians and visitors alike to have leisure walk at the reserve and get to watch the iconic hornbills – Jimmy and Juliet – as well as other wildlife. The walk has attracted some 100 people, young and old, since it first started. Members of the public are encouraged to take part in the walk which is free-of-charge and will start at 4.30pm from the car park of the former Tenby International School. Datuk Sebastian Ting, chairman of Piasau Camp Miri Nature Park Society and his committee members will be among those expected to take part in the walk. The society, the prime mover of the hornbill walk, is also among non-governmental organisations (NGOs) that actively supports the government’s effort to establish the nature reserve, which was launched in May 10, 2014.

The demolition of old houses at the reserve is on-going and is scheduled to be completed by 2016, while works to convert the former Tenby International School into a visitors’ centre will commence shortly.

The reserve is home to 73 species of birds, including hornbills (totally protected species of bird), two species of egrets and mammals such as palm civet, prevost squirrels, rats and plantain squirrels.

Five species of amphibians, 12 species of reptiles, 10 species of butterfly and 111 plant species, including small trees and shrubs, and four species of figs were also recorded on site.