Friday, October 7
You are at:Home»News»Sarawak»Sibu observes this year’s Earth Hour in style 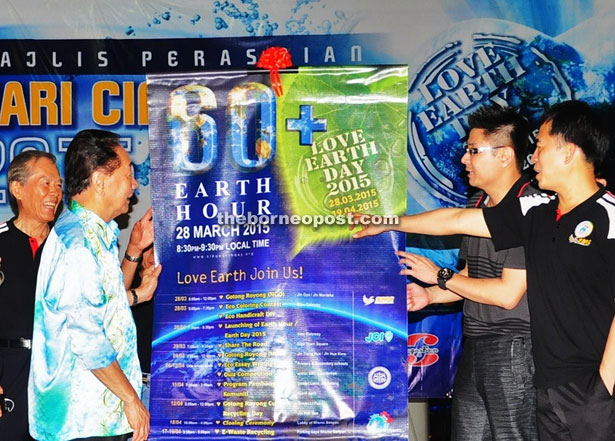 The launching of the Earth Hour. From left are Tiong, Wong, Andrew and Hii. — Photos by Othman Ishak

In the one-hour event beginning 8.30pm, lights on two iconic features here – Sibu Gateway and Sanyan Building, were switched off, together with the front lights of government buildings, hotels and commercial buildings.

Speaking at the launching of the globally linked event at Sibu Gateway, Wong said Sibu folk had joined the world to bring awareness on how important it was to care for Planet Earth.

“There is only one Planet Earth and one world. The inhabitants must conserve not only for themselves, but also for future inhabitants. We turn off non-essential lights as a gesture on energy saving.”

Wong said one hour was sufficient to inculcate the sense of responsibility for Mother Earth.

“Each of us plays a little part. Together, we make things happen.”

Wong said development should continue in the world, but it must be sustainable.

“There is no compromise for the environment’s well-being. What we do, we must preserve and conserve.” 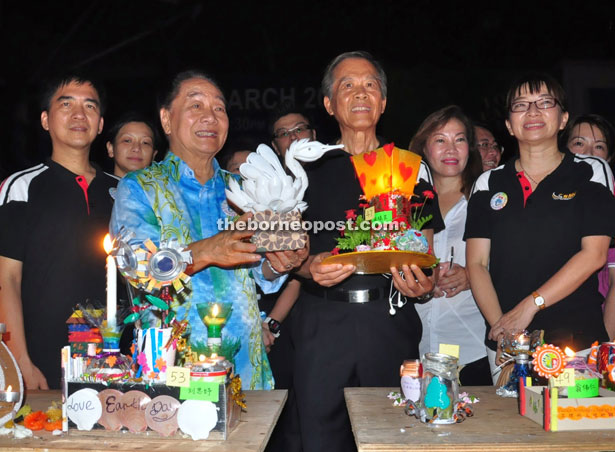 Wong (second left) and Tiong (third left) hold candle holders made by the children. Hii is on the left.

He said townsfolk must work with the government agencies, NGOs and other bodies to make the world a better place.

He said Sibu Municipal Council had done a great deal in greening Sibu, adding it had also led townsfolk to say no to plastic and styrofoam containers and promoted other green lifestyles.

“There are rules and regulations to enforce on the people, but the best way to do this should come from the people’s spontaneous efforts, not the laws.”

Wong called the double-joy a two-in-one celebration to mitigate the greenhouse effects.

In her speech, organising chairwoman, Councillor Rhoda Ting, said the string of activities stretching till April would bring awareness on sustainable energy and address environmental issues like pollutions and management of clean water and air.

She said the council was first local council in the state to ban styrofoam food containers last year.

“We shall continue calling on townsfolk to say no to plastic bags. Among other continuing efforts are recycling activities, household waste segregation and others.”

Sibu Youth Council (SYC) played a leading role in pumping up creativity during the celebration on Saturday, and youths, students, and kindergarten kids took centre stage.

The performers used recyclable plastic containers as drums and also danced and sang with torches and luminous hand bands.

Holding candles, the performers encouraged the audience to join them in songs and dances.

“This is a reflection of young people spending an hour without power, electronic devices and the computer. They spent an hour in the open to enjoy the touch of nature and warm interaction.

“This is a different taste of life we have almost forgotten in modern technology,” said the night’s announcer. 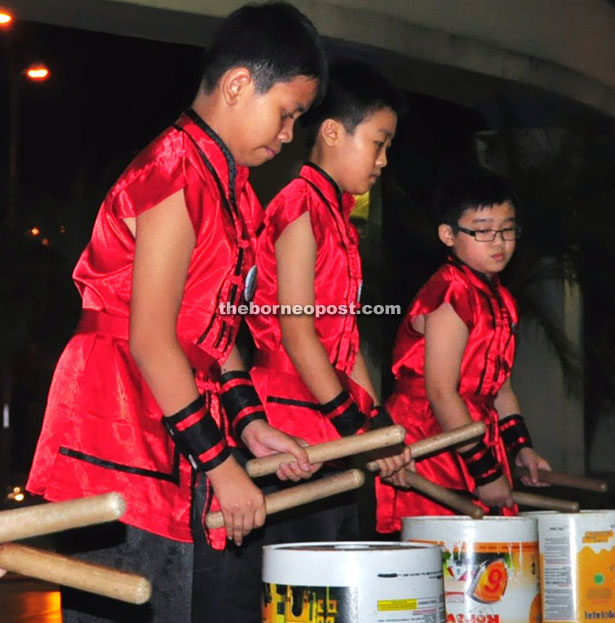 There were two side events: children colouring contest and the making of candle stands from recycle items.

Colouring contest co-hosted by a Jaycees chapter in Sibu and Sugar Bun started at 5pm as 160 primary students thronged Sibu Gateway to colour their world on papers.

During Earth Hour, candles were lit on the stands and holders made from recycle items.