Wednesday, July 6
You are at:Home»News»Sarawak»Len: Easier for technical graduates to secure good jobs 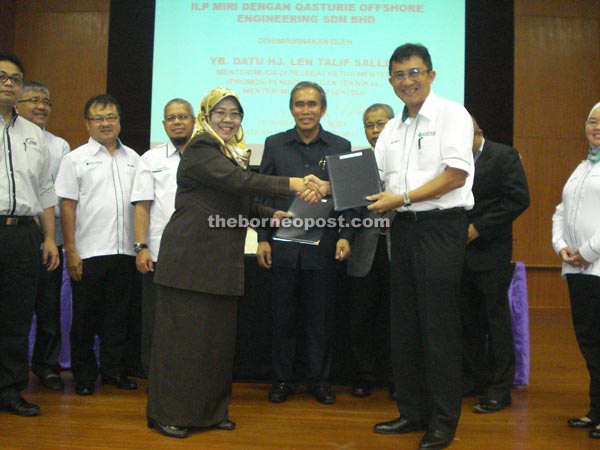 Len (centre) witnesses the exchange of MoU between Rosnah and Druce (second right).

MIRI: Graduates of technical and vocational institutes have greater chance of securing good jobs in the industrial sector compared to those who only have academic qualification.

In pointing this out, Assistant Minister in the Chief Minister’s Office (Promotion of Technical Education) Datuk Len Talif Salleh said more than 80 per cent of graduates in the technical and vocational field secured employment during the first three months after completing their studies.

“There were even cases of trainees who were yet to complete their studies already receiving job offers from industrial companies.

“This shows that their skills qualification is a hot cake in the sector and in high demand,” he said at a press conference after the signing of a memorandum of understanding (MoU) for a smart partnership between Industrial Training Institute (ILP) Miri and Qasturie Offshore Engineering Sdn Bhd yesterday.

“Through a thorough and intensive training, we will be able to produce highly skilled workers who are not only efficient but also maximise a company’s revenue,” he added.

At the same time, Len revealed that more students were now opting to take up technical education in ILP Miri, including those from the rural areas particularly the Penans.

Earlier on, Rosnah said Miri ILP also gave focus and priority to the intake of students from the rural areas, especially Penans.

She said currently the institution has three Penan students.