Tuesday, February 7
You are at:Home»News»Sarawak»RM4.7 mln reef ball programme completed
For the freshest news, join The Borneo Post's Telegram Channel and The Borneo Post on Newswav. 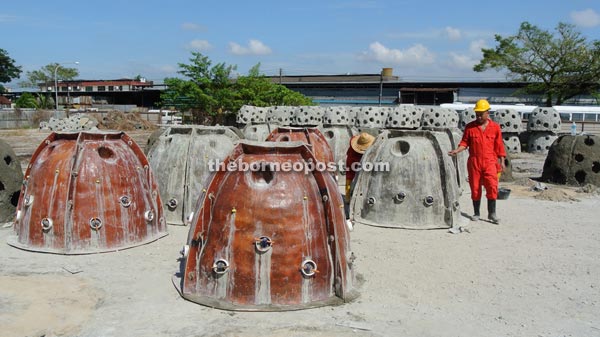 The reef balls being constructed at a factory in Kuching. Made from non-toxic materials, they weigh about a tonne each. 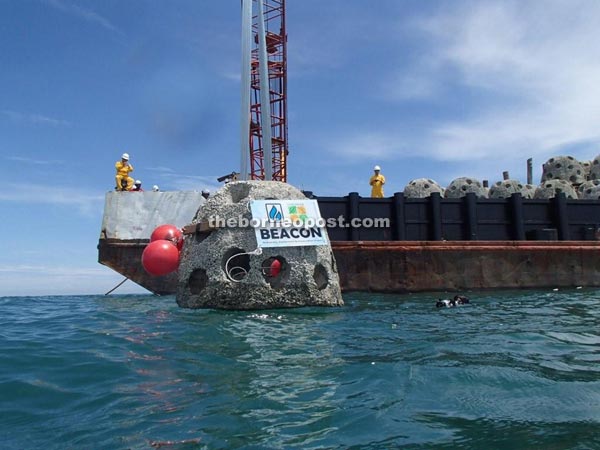 A reef ball being lowered into the sea. Under MLNG’s Beacon Project, 1,500 reef balls have been deployed in waters off Bintulu, assisted by divers from MLNG and Sarawak Forestry. 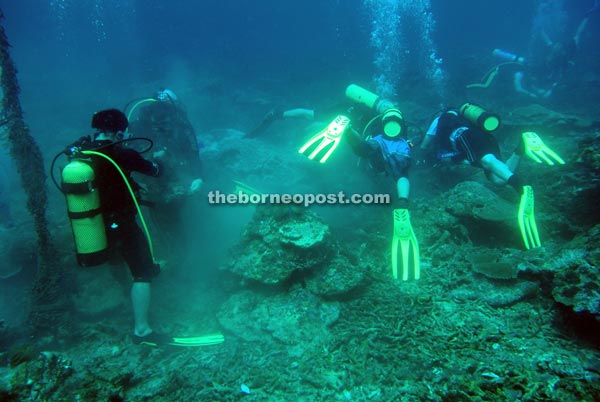 Under the project, MLNG allocated RM4.7 million for the reef ball programme to deploy 1,500 specially-made reef balls in Bintulu’s waters over a period of three years.

The objectives of the reef ball programme are to create a sanctuary for marine life, prevent illegal trawlers destroying natural reefs, and encourage the growth of corals.

“For the past two years, we deployed reef balls in zig-zag lines along the coast of Similajau National Park. This year, we will arrange the reef balls in clusters of 10 in the national park’s waters and clusters of 25 at nearby Patricia Reef,” said James Bali, chairman of the Beacon Project technical working committee and biologist from Sarawak Forestry.

According to James, the clustering of 10 is to protect endangered turtles from illegal trawlers by closing the gap between previously deployed zig-zag lines of reef balls. The larger clusters near Patricia Reef is an experimental plot for reef-building and reef life enhancement, providing new surface for coral polyps to settle down to create new colonies of reefs.

MLNG HSE Department Fire Marshall and one of the volunteer divers, Wahed Kep who has participated in all reef ball deployments over the past three years said: “I am passionate about diving and the conservation of our marine life. Every year, more and more species are becoming endangered. So if MLNG, our colleagues and I can do our part in helping to avoid this, then I am all for it.”

Wahed is among 15 divers trained under MLNG’s Beacon Project Divers Training programme where staff from various departments are being trained to become Open Water Divers certified by the Professional Association of Diving Instructors (Padi).

This time around, some 20 divers from among MLNG staff and nine from Sarawak Forestry carried out Benthic Substrate Surveys to identify suitable spots for deployment, and assisted with the deployment.

The Beacon Project is a signature corporate social investment programme carried by MLNG in collaboration with Sarawak Forestry.

The eight-year project comprises two components including the Beacon Reef Ball programme which sees 1,500 artificial reef balls deployed in the sea as sanctuaries for marine life.

Another one is the Conservation, Education, Promotion and Awareness (Cepa) programme which has many activities to raise public awareness on environmental conservation. Among activities under the Cepa component are the Beacon Project Friends of Nature environmental camp for secondary school students, cetacean aerial and boat surveys to gauge the count of marine mammals in local waters, and reef and beach cleaning activities.

Sarawak Forestry was established to position the state at the forefront of sustainable forest management and conservation as outlined in the Sarawak Forestry Corporation Ordinance, 1995.