Sunday, September 25
You are at:Home»News»Sarawak»‘Nota’ – psycho-thriller in Bako headed for Cannes 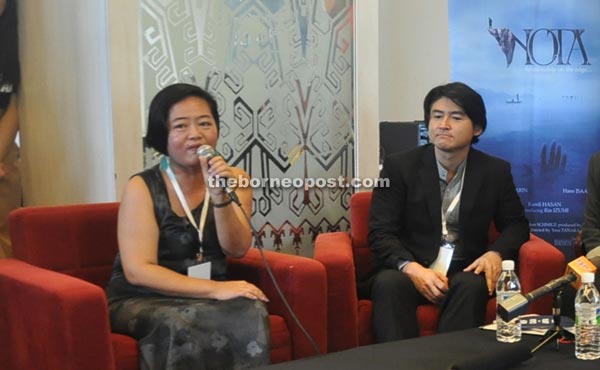 Yasu (right) and Bea speaking about their upcoming psychological thriller movie at a press conference yesterday.

KUCHING: The general public will soon be able to watch a psychological thriller that was filmed at Sarawak’s very own Bako National Park.

Entitled ‘Nota’ (Note), the movie will be released in August nationwide. It is also headed to the prestigious Cannes International Film Festival in France next month.

The movie was written and directed by Yasu Tanaka and produced by his wife Bea.

It tells the story of Kamal and Erin, a couple facing mid-life crisis after prolonged lack of real communication. On their 10th anniversary, they decide to have a trip to Bako National Park where they had their first trip over 10 years ago to reignite their bond of love and marriage.

Erin inadvertently discovers that Kamal is drafting a note that implies he is planning to end it all. Shocked, she starts feeling sorry and guilty about their situation. However, she later finds out about Kamal’s secret that infuriates
and upsets her so she begins planning the perfect murder using his note as strong evidence of his death.

Her plan goes awry when their boatman to the remote national park, a local Sarawakian Jemat, comes into the picture.

The lead cast for Nota are Maya Karin and Hans Isaac, both top box-office actors in Malaysia. Others are Ramli Hassan and Rin Izumi.

The Tanakas started their relationship with the Malaysian film industry through their Masterclass on scriptwriting at National Film Malaysia (Finas) since 2009. The globe-trotting couple founded 42nd Pictures in Malaysia after seeing much potential has yet to be tapped into the industry here. Their vision is to take Malaysian stories to the international market.

Meanwhile, director and scriptwriter Virginia Kennedy will be releasing her first feature film entitled ‘Girlfriend Kontrak’ in July this year.

The movie stars Keith Foo and Nur Risteena, among the cast.

‘Girlfriend Kontrak’ is about a simple village girl Aliza on a mission to save her beloved fireflies from being destroyed by a development project. The project is owned by a ruthless millionaire playboy, who ends up hiring Aliza as a contract girlfriend.

It is the latest romantic comedy from Primeworks Studios, a joint production by Grand Brilliance film production unit and Independent Pictures.