Monday, May 16
You are at:Home»News»Sarawak»Scary ride for motorcyclist as bike catches fire 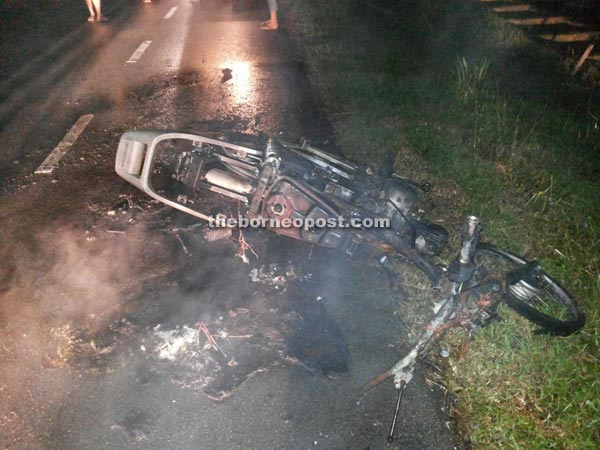 Photo shows what is left of the burnt motorcycle.

SARIKEI: A motorcyclist had the scariest ride of his life after his machine caught fire while he was riding along Jalan Ixora, Kampung Seberang here on Thursday.

The Sarikei Fire Station said a distress call was received around four minutes after the incident occurred at 10pm.

When a team of firefighters in one fire engine arrived at the scene, the motorcycle was already about 80 per cent burnt.

A witness said it took firefighters some five minutes to completely put out the flames.

According to the motorcyclist, who only identified himself as Mohd Jamaludin from Baji Resettlement Scheme II, the fire started with a small spark from the engine, which quickly spread.

Mohd said he could not do anything other than jump off the motorcycle and watch helplessly from a distance as the flames continued to spread.