Tuesday, May 11
You are at:Home»Business»Borneo Island City to be new landmark for Sarawak 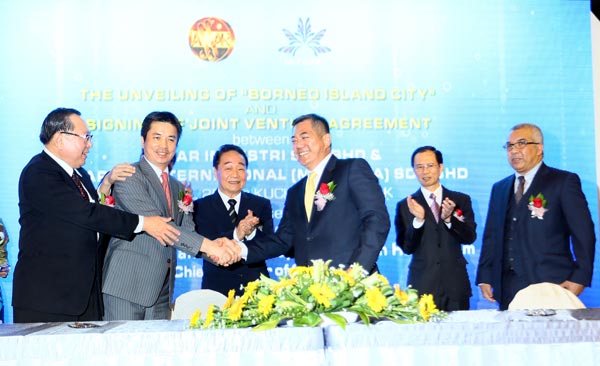 KUCHING: Borneo Island City is set to be a new landmark for Sarawak as a vibrant resort-city which will spur the modernisation of Kuching.

As a green city with a beautiful environment, the project will be an integrated development that promotes affordable lifestyle spread over an area of 1,400 acres.

It will be an iconic township combining modern amenities amidst the natural setting of mangrove forest with man-made environmental friendly lakeside living.

Tan Sri Datuk Amar Bujang Mohd Nor, chairman of the board of directors of ASSAR, praised Le Parker chairman Charles Lin and his team for the remarkable design and concept put forward for the masterplan of Borneo Island City which emphasises the integration between nature and man-made spaces.

This has enabled the creation of a new form of ecological balance and sustainable living environment within the new township.

“We envisage the development to transform the area into a new growth north that will exist and complement the rapid development of the modern and developing Kuching city,” he said during the launch.

This joint-venture efforts between the two partners will showcase the uniqueness of the bilateral ties between Sarawak and China which has spanned over seven centuries.

In other words, all amenities will be available within the four corners of this ‘city within a city’.

It will offer opportunities for sound investment in Sarawak’s real estate. What is crucial to this unique project is the emphasis of ‘green-city’ concept and retaining as far as possible the natural environment.

The project will be developed over 15 years with a gross development cost of RM10.58 billion and is expected tol contribute positively towards urbanisation and economic development of the suburbs of Kuching and Kota Samarahan areas.

“The development will augur well with the government’s long term development plan for the future Kuching city and its surrounding regions through the years 2020,” Amar Bujang said.

As most of the areas nearby the city are fully developed, there will be natural expansion into the outskirts, creating satellite townships, better for the increasing population.

“In addition, Borneo Island City has also been approved with a special development area that offers opportunities for foreigners to own the properties,” he added.

As Sarawak is known for its political stability and racial harmony, the project will likely attract foreigners to come to Sarawak not only as tourists but also as investors.