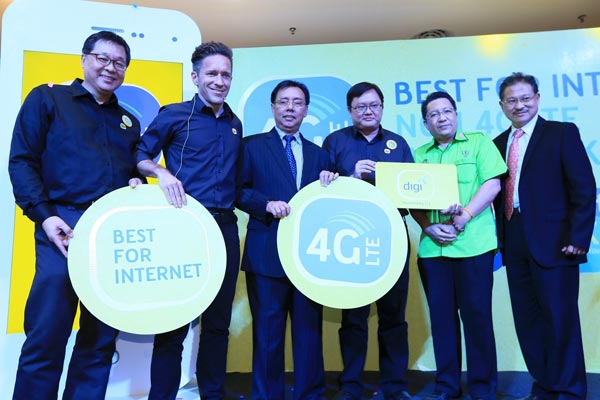 (From left) Benny, Thrane, Rundi, Loh, Wee, and Ng are seen during a photo-taking session following the official launch of DiGi’s 4G LTE service in Sarawak.

KUCHING: DiGi Telecommunications (DiGi) has officially launched its 4G long-term evolution (LTE) services for Sarawak and the service is now available in Kuching, Miri and Bintulu.

It plans to expand more areas in Kuching, Miri, Bintulu, Sibu and Samarhan, bringing the company’s LTE footprint in Sarawak to 42 per cent and total 3G coverage in the state to 71 per cent by year end.

Alongside the expansion of DiGi high-speed network, the company said it will focus on delivering quality, consistent internet experience to its customers, with a wide variety of products and services at all price points.

Officiating the launch yesterday, Datuk Dr Stephen Rundi Utom, Assistant Minister of Public Utilities (Electricity and Telecommunications), said the launch of DiGi’s 4G LTE is in line with placing Sarawak on par, in terms of telecommunications, with every other states in the country.

He said, “Today is a significant milestone in terms of internet accessibility especially for Kuching.” He added that with this higher speed and capacity, he hoped it could facilitate the business and economic growth of Sarawak.

DiGi’s chief sales officer Loh Keh Jiat said that East Malaysia is a key market to DiGi as Sarawak has the highest internet data demand on its network.

As such, he said, DiGi has placed its focus on marketing the 4G LTE network in Sabah and Sarawak, first.

In Kuching, DiGi currently has an LTE population coverage of 72 per cent and 40 to 45 per cent in Miri and Bintulu.

Nationwide, DiGi has grown its 3G coverage to 86 per cent and its LTE footprint to 32 per cent of populated areas nationwide.

“With DiGi 4G LTE, customers will enjoy a consistent internet experience of more than 5Mbps, 80 per cent of the time on the No.1 4F LTE network in Sarawak.

“Customers can experience the higher capacity and brisker speeds in the form of faster HD video and music streaming, smoother video chatting, downloading apps, and sharing on social media will be instand, and the difference when connecting your laptop with your smartphone hotspot,” Loh added.

Meanwhile, Thrane revealed that with DiGi’s 4G LTE, customers can enjoy high-speed internet that is capable of reaching 65Mbps, with a general consistency of 5Mbps and above.

He also pointed out that DiGi is focusing on ensuring that the network is consistent and stability throughout the area.

Customers in Kuching have a choice of premium devices like the iPhone 6 to more affordable options such as the Lenovo A606, Meizu MX 4 and Honor 6, available free with selected DG Smart Plans.

DiGi will be hosting a three-day roadshow which started yesterday, at Plaza Merdeka where customers can sign-up for the new range of LTE postpaid DG Smart Plans, iDiGi Plans and Broadband plans.

During this three-day promotion, existing DiGi prepaid and postpaid customers can begin enjoying 4G LTE on their LTE-enabled devices with free LTE SIM upgrade redeemable at the roadshow itself.

The company plans to progressively grow its footprint nationwide, with focus on areas where there is strong demand for LTE services and availability of devices.