Tuesday, November 24
You are at:Home»News»Sarawak»Slow healing for sun bear at Matang Wildlife Centre 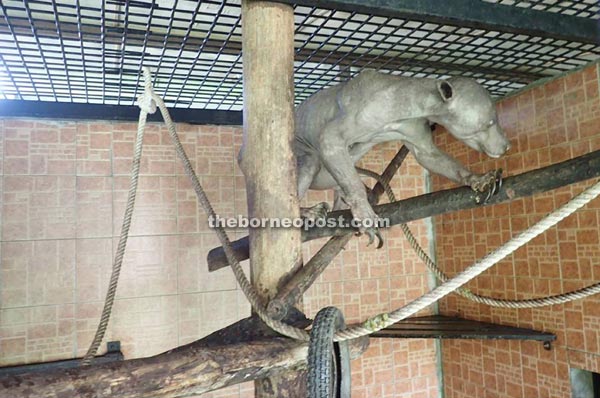 The sick sun bear being nursed back to health at the Matang Wildlife Centre.

KUCHING: The sick sun bear taken into recent captivity in Bintangor is currently undergoing treatment at Matang Wildlife Centre in the good hands of Dr Silje Robertsen, a volunteer veterinarian from Norway.

According to a statement from the Sarawak Forestry Corp, the female sun bear is currently alert and is able to eat normally.

However, as the bear has been very sick for a prolonged period, it is still too early to determine if she can make a full recovery.

At the centre, the sun bear is still kept in quarantine as she is still weak and is suffering from hook worms, mite infestation and moderate anaemia.

In the meantime, her treatment continues based on a carbohydrate-rich diet with food supplements, antibiotics and protein.

She is also to remain in quarantine to minimise external disturbances.

According to Matang Wildlife Centre manager Siali Aban, there have been numerous visitors enquiring and curious to see the sick sun bear since she was handed over to the centre on April 2.

Public interest was stirred when the animal was mistaken to be a ‘strange creature’ sighted in the wild’ near an oil palm plantation until its capture confirmed it to be a sick sun bear.