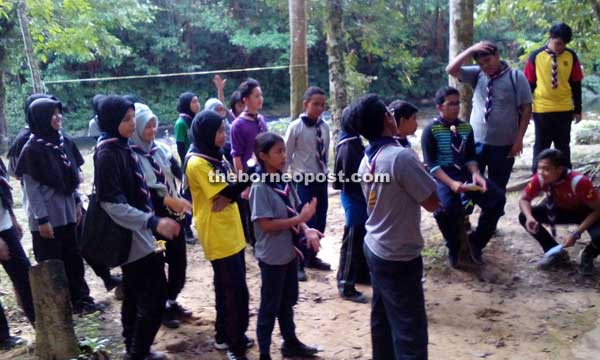 A representative from Matang Wildlife Centre briefs participants on safety.

KUCHING: A total of 244 students from 19 secondary schools in Kuching and Miri divisions attended the first ever World Scout Environment Programme (WSEP) and Messenger of Peace (MOP) at the Matang Wild Life Centre here from April 10 to 12.

It was organised by Sarawak Scout Academy and Federal Scout Sarawak in collaboration with Sarawak Forestry Corporation, held for the first time ever in the country.

State scout commissioner-general Sudaryo Osman who closed the programme said the commitment shown by participants was a reflection of a responsible new generation.

He said as Messenger of Peace members, the state scouts would work with the state government in protecting and taking care of the environment and forests.

The WESP and MOP were held based on training modules set and approved by World Scout Organisation and Federal Scout Malaysia.

Through the programme, students had the chance to learn more and appreciate the beauty of nature and the need to take care of it.

Participants also had the opportunity to learn more about their roles in sustaining the natural environment through the WSEP and MOP platforms.

All participants were given WSEP and MOP badges as well as a certificate of participation each.