Sunday, February 28
You are at:Home»World»Dissidents on the ballot in historic Cuba vote 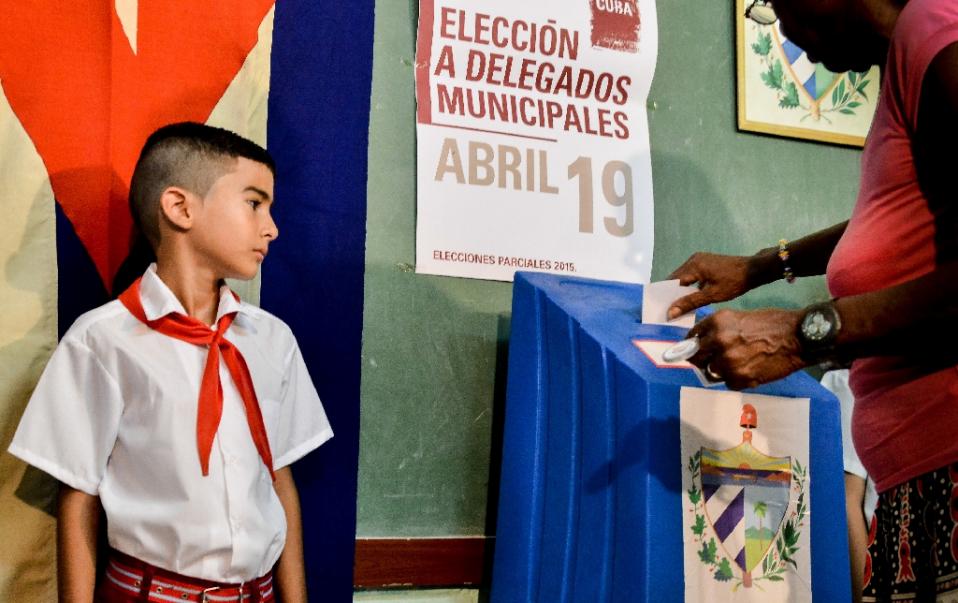 A woman casts her vote at a polling station in Nautico neighbourhood in Havana, Cuba, on April 19, 2015, during municipal elections (AFP Photo/Adalberto Roque)

Political dissidents Hildebrando Chaviano, a 65-year old lawyer and independent journalist, and Yuniel Lopez, a 26-year old computer scientist, have already made history by surviving the first round of balloting and making it to the final vote.

Chaviano and Lopez would be the first officials elected from outside the Communist Party since Cuba’s electoral law was put in place under former president Fidel Castro in 1976.

They are the only two non-Communist candidates among 30,000 people running for local office in Sunday’s elections.

In their official electoral biographies displayed publicly in Cuba, Chaviano and Lopez are described as “counter-revolutionaries,” and there has been no mention of them or their parties in state-controlled media.

Election victory for the two opposition figures would be seen as a sign that the all-powerful Communist Party is loosening its grip somewhat, as it aims to normalize ties with the United States.

The elections follow a historic rapprochement announced by Washington and Havana in December to work toward warming relations, boosting trade and easing travel after five decades of hostility.

US President Barack Obama and his Cuban counterpart Raul Castro met in Panama this month — the first face-to-face talks between US and Cuban leaders since 1956.

Cuba is also in talks to renew ties with several European governments.

Cuba, the only one-party Communist regime in the Americas, still bars all political parties other than the Communist Party of Cuba in its constitution.

But Chaviano downplayed the idea there may have been any political easing on the government’s part.

“We simply slipped through a loophole,” Chaviano told AFP.

“That has caught them by surprise, and now it’s too late for them to backtrack.”

Revolutionary icon Fidel Castro, 88, cast his ballot at home, handing it to election officials who deposited it into a ballot box for waiting television cameras.

His brother Raul Castro, 83, has said he will not seek reelection in 2018. He could be succeeded by Communist Party vice president Miguel Diaz-Canel.

More than eight million Cubans of voting age were called on to vote Sunday, with more than 12,000 municipal posts to be filled.

The National Electoral Commission billed the vote as an act of “genuine democracy” that lets Cubans build a more just society without meddling from abroad.

A Cuban state council official said the elections showed the country’s commitment to its revolution and noted that they coincide with the anniversary of the failed US-backed invasion of the Bay of Pigs in 1961.

The United States has expressed concern over what it called the “violent silencing” of dissidents in Cuba, and American lawmakers have said Washington will continue to push Cuba on its human rights record. -AFP