Monday, May 16
You are at:Home»News»Sarawak»Bomba puts out fire on docked ship 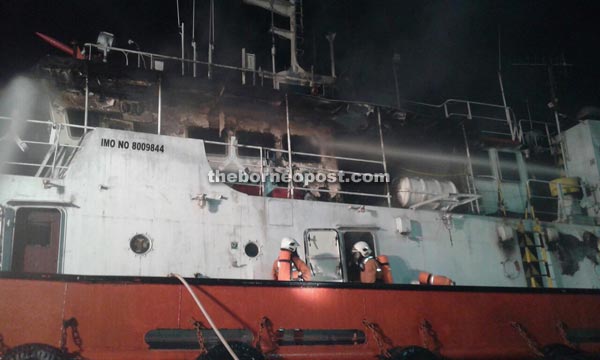 Firemen clearing the debris and ashes after bringing the situation under control.

MIRI: The swift action of the Fire and Rescue Department (Bomba), Lopeng Zone 6 helped save a ship from being engulfed in flames at Kuala Baram shipyard yesterday.

Bomba superintendent Law Poh Kiong said the incident occurred when the ship, which was used to ferry offshore workers, was undergoing maintenance.

Upon receiving a distress call at 11.02pm, a team of 15 firemen from Lopeng Zone 6 led by senior fire officer Henry Jugah and Lopeng Zone 6 chief Eddy Zulkifli Abdullah rushed to the scene, which was located 30km away.

Bomba assistant superintendent Ishak Amran was also at the scene to assess the situation.

“The firemen arrived at 11.35pm and it took them more than half an hour bring the fire under control, which was at 12.12 midnight,” he told reporters.

Law, meanwhile, said no casualties or injuries were recorded as there was no one around at the time of the fire.

The three-storey ship, which has been undergoing repairs for the past four months, was 50 per cent destroyed.

“The cause of the fire is still under investigation,” Law said, adding that they had yet to determine the exact cause and losses incurred.