Wednesday, December 1
You are at:Home»News»Nation»Uggah expresses concern about implementation of food rules 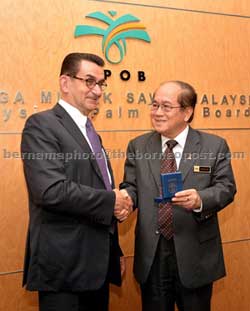 Uggah presenting a memento to the head of French Senate delegation, Gerard Miquel, (left) Senator of Lot (Midi-Pyrenees) after the meeting with the French delegation, at the Malaysian Palm Oil Board office. —Bernama photo

KUALA LUMPUR: Minister of Plantation Industries and Commodities Datuk Amar Douglas Uggah Embas is concerned about the implementation of the Food Information Regulation (FIR) in the European Union (EU).

He said while the ruling requires all food product manufacturers to identify the specific vegetable oil used, some countries went overboard to indicate that their products were not made using palm oil.

“There are 687 products with 603 of them in France and labelled ‘Sans huile de palm’or ‘Palm Oil Free’. ‘Palm Oil Free” labelling increased rapidly in France and Belgium in 2014 by 116 per cent compared to 2013,” said Uggah in his speech welcoming the visit of four French senators at Malaysian Palm Oil Board here yesterday.

“Malaysia always regarded France as an important traditional market and  Malaysia is hopeful of stronger ties with them in the oil palm trade.