Saturday, December 3
You are at:Home»News»Sarawak»call on M’sia to join regional maritime movement against piracy 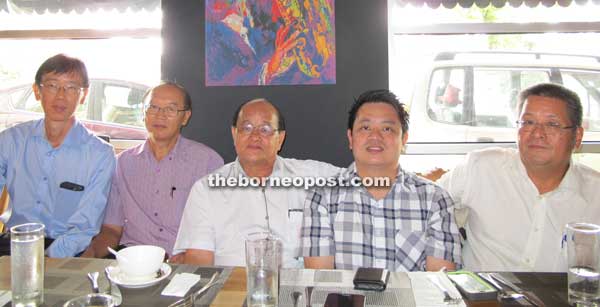 Ting with Renco, Ing Hui, Lee and Richard during a photo call at the the press conference after SSA’s 12th AGM in Kuching.

KUCHING: Malaysia should consider joining the Regional Co-operation Agreement on Combating Piracy and Armed Robbery Against Ships in Asia (ReCAAP) in promoting and enhancing security at sea and of the shipping business in the region.

According to Sarawak Shipping Association (SSA) vice chairman Renco Yong, Malaysia is yet a member of ReCAAP despite piracy has become a rising concern in the Strait of Malacca, Singapore Strait and Pulau Tioman.

“Australia and the United States are the last two countries to join (ReCAAP), while France and Germany have indicated their interest. In Asia, the only two countries that have yet to join are Malaysia and Indonesia, due to disagreement on the location of the HQ (headquarters) – which is currently in Singapore.

“The Foreign Affairs Ministry has declined to sign due to undisclosed reasons, despite the agreement by the Transport Ministry to join ReCAAP,” he told a press conference after SSA’s 12th annual general meeting (AGM) here yesterday.

The association also appealed to the government to exempt all domestic plying vessels from the enforcement of the International Maritime Labour Convention (MLC) 2006.

“The MLC 2006, which came into force last August, may not be practical to local shipping industry players,” said Renco, adding that the United Kingdom and Germany did not strictly follow the international standards.

For examples, he said the convention stipulated that seafarers ought to be paid US$900 (RM3,200) monthly, while both hot and cold water must be provided on board and that the height of the deck must be increased.

“We Asians are not as tall as the ‘white guys’; so there’s no point in increasing the deck’s height. The higher it is, the more unstable the vessel gets. At present, local seafarers earn between RM800 and RM1,000 per month.”

“Most of the essential goods and building materials are brought in from Peninsular Malaysia. Imposing GST on these cargoes would mean increasing costs, which will eventually be a financial burden for our consumers.”

On this, Ting proposed domestic freight charges and all shipping-related services such as agency fees, to be zero-rated towards helping to stabilise the cost of living and expenses of doing business in the state.

“The Royal Malaysian Customs and Excise Department has not issued a clear list of services that are subject to the standard rate. We hope that the Marine Department would work closely with the Customs on sorting out those grey areas.”

According to him, Sarawak needs more gazette-surveyors to sign trading certificates. So far, there is only one serving the entire shipping industry in the state.

“We have 8,000 to 9,000 ships in Sarawak, and (having only) one gazette-surveyor is definitely not enough. Sometimes, it takes over a month for those in Sibu, Bintulu and Miri to get their certificates because there are no offices in these divisions.

“We are left with little choice but operate at our own risks because plying without the certificate is akin to travelling on the road without a road tax sticker.”

“All standard ports in Malaysia offer one-stop services with all four agencies – the remaining two are Customs and Health Department – to conduct the clearance. Senari Port is the largest in Sarawak, and we hope the government could make it a one-stop centre.”