Wednesday, December 1
You are at:Home»News»Sarawak»Over 1,700 logs, 519 bank accounts frozen under Ops Gergaji since May 14 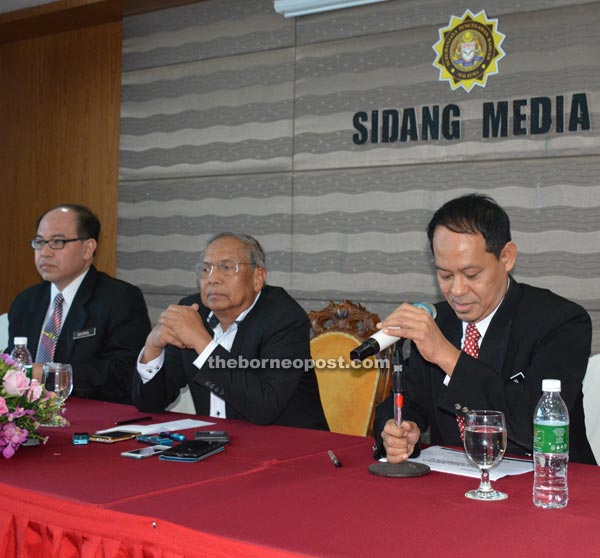 SIBU: The integrated operation against illegal logging, ‘Ops Gergaji’, confiscated 1,785 logs and froze 519 accounts as at Thursday (May 14).

According to Malaysian Anti-Corruption Commission (MACC) deputy chief commissioner (operations) Datuk Seri Mohd Shukri Abdull, his team had also seized heavy machinery such as bulldozers and generators during the operation, which kicked off on May 12.

“At the same time, MACC and IRB (Inland Revenue Board) have frozen accounts, which we suspect are involved in this activity. Until yesterday (May 14), we froze 519 accounts involving an amount of about RM700 million, with MACC calling up 14 individuals to assist in the ongoing investigations,” he said at a press conference here yesterday, which was also attended by Chief Minister Datuk Patinggi Tan Sri Adenan Satem and state MACC director Datuk Badrul Shah Norman.

Mohd Shukri said Ops gergaji involved several departments, with MACC looking into the possibility of corruption occurring, as well as the conversion of illegal monies from logging.

IRB, he added, would check for tax evasion while Sarawak Forest Department would focus on stealing of logs or illegal logging activities.

“The teams would be further assisted by the GOF (General Operations Force). So far, we’ve deployed about 400 personnel in operations across the state.”

Mohd Shukri said ‘Ops Gergaji’ had gone across 49 locations here in Kuching, Sibu, Bintulu, Bakun and Kapit, where 48 premises were ambushed – among which 27 were sawmills and log ponds.

“In Miri, 13 premises were raided followed by 12 in Kuching, 12 in Sibu, six in Bintulu, four in Bakun and two in Kapit.”

Previous ArticleSoppoa: Unfreeze bank accounts of businesses unrelated to logging
Next Article ‘Nation will continue losing young talents unless UEC given due recognition’