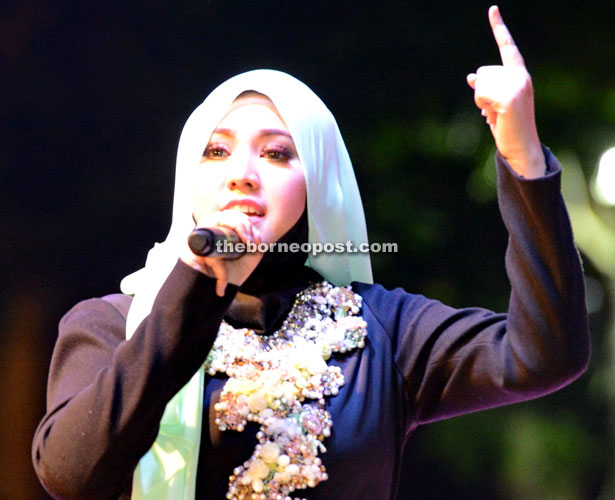 The show, which kicked off at 6.30pm, featured performances by the Chinese Orchestra of Pei Min Middle School, Sarah Hii with her ‘Little Fairy’ dance, dancers from SJKC Krokop Miri, local singing artists Chloe Chan and Rickie Andrewson, as well as Ladies of Hornbills with their traditional dance number.

Many spectators use their smartphones to capture shots of some stage performances.

After the cake-cutting ceremony and presentation of souvenirs, the VVIPs joined the crowds for the highlight – a showcase by Shila Amzah, the inaugural champion of Chinese reality competition, Asian Wave.

The songstress, dubbed ‘Asia’s Sweetheart’, stole the audience’s heart with her powerful vocal and versatility, in which she delivered five songs – three of which were in Chinese.

The heat continued with the energetic performances by the Astro Battleground 2014’s top two dancing troupes, Fearless and S-Strikers.

The audience was also treated to an exhilarating show by Sada Borneo – one of the semi-finalists of AXN’s hit reality show, ‘Asia’s Got Talent’. The ensemble closed the concert magnificently, with their medley of modern-traditional fusion of Malaysian music.

Miri mayor Lawrence Lai, in his address earlier, said the city had seen a huge transformation, from its humble beginning as a small fishing village up to becoming a modern metropolitan centre that it is today.

This, he said, added to the city being a melting pot of 27 ethnic groups living harmoniously, making it a prime location for tourists coming to the state.

“Miri is definitely one the best living examples of the ‘1Malaysia’ concept. With our super-active NGOs (non- governmental organisations) and friendly communities, we are able to break 13 Malaysia Book of Records here.”

Lai also said for the past 10 years, the Miri City Council had been earning prestigious accolades from the government, including for its feat in hosting international sporting events, conventions and festivals.

“We have pledged our full commitment to serve the people of Miri, focusing on three strategic thrusts – ‘Vibrant and Safe’, ‘Clean and Green’, and ‘Community and Culture’.

“I call upon the people of Miri to work together and support the council towards achieving our vision of being the ‘Most Liveable Resort City’ by 2020.”