Monday, May 23
You are at:Home»Features»Glimpses of tough early life in George Town 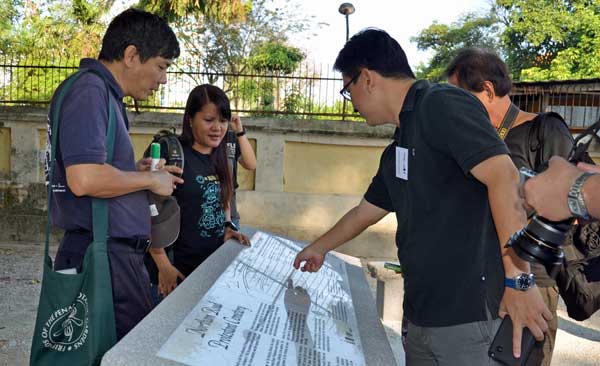 Sibu MP Oscar Ling (right), who joined the Experience George Town programme, is seen here pointing to the engraved stone, containing information on the cemetery as Leong (second left) and others look on.

TAKING a walk in an over two-century-old cemetery is not something you would normally do.

But for some reason, the Northam Road Protestant Cemetery in George Town, Penang, is an interesting place to visit.

The gardened cemetery offer visitors a glimpse of the tough life of the earliest residents. Most people buried there did not even live up to the age of 50.

Located within the Unesco World Heritage site of George Town, the cemetery, which was used from 1780 to 1892, is listed as Category 1 heritage site.

It is said the earliest recorded burial at the cemetery was that for William Murray who was appointed Lieutenant Fireworker in the Bengal Artillery in 1785.

He died on Dec 22, 1787, and was the earliest recorded burial in the cemetery although his tombstone was unknown.

Leong said the cemetery was where the founder of colonial Penang, Captain Francis Light, was laid to rest after he died at the age of 54 on October 21, 1794, from malaria.

“There is a broad cross-section of colonial society interred in the cemetery, ranging from high ranking government officials and civil servants to army officers, policemen, doctors, engineers, judges, merchants and clergy.

Five reporters from Sarawak, including The Borneo Post, joined the Experience George Town programme — courtesy of GTWHI and Penang Global Tourism (PGT), the Penang state government agencies for its Heritage and Tourism.

The programme was to promote places of interest in Unesco World Heritage Site in George Town. 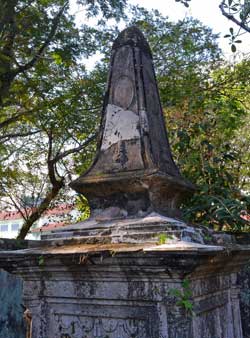 An imposing tombstone at the cemetery.

Leong said around 33 per cent of the identifiable persons interred at the cemetery were below age of 30.

This, she added, reflected the high mortality rate from tropical diseases such as malaria, cholera, dysentery and hepatitis in 19th Century Penang.

“Given the frequent outbreaks of disease, it is ironic the island was regarded as a ‘change of station’ for British civil servants and military personnel based in India.

“There are also 12 surviving memorials believed to be those of Hakka Christian refugees from the Taiping Rebellion in China from 1850 to 1864.

“The cemetery and the adjoining Roman Catholic Cemetery are created soon after the British East India Company (EIC) established a settlement in Penang in 1786.

“The two cemeteries were simply referred to as the ‘burying ground,’ demonstrating an early tolerance between Catholics and Protestants in the new settlement which was not reflected in the old world at the time,” Leong said.

She revealed a survey carried out in 2013 found the cemetery had 459 graves, including 432 in-situ graves and 27 disturbed graves.

“Some of the disturbed graves also have more than one plaque mounted on a panel. There are also 150 graves without any names, erroneously suggesting a total of 495 individuals were interred at the cemetery.”

According to her, the actual number is higher as some graves are probably unmarked and many graves destroyed by Japanese bombing during the World War II.

“The survey also revealed 244 males and 129 females were listed as buried in the cemetery. The oldest adult was 84 years old William Thomas Lewis and the youngest, a four-day old William Duncan.” 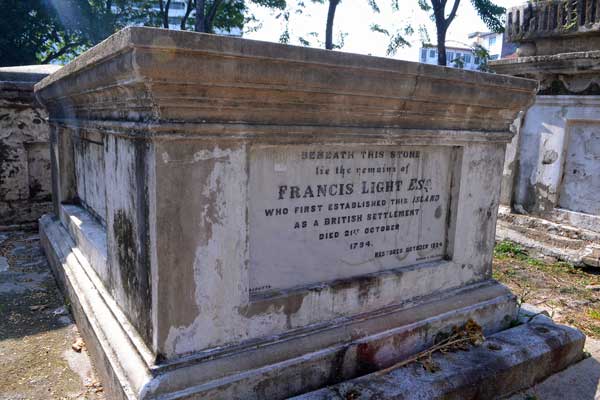 The tomb of Captain Francis Light.

She added that Logan popularised the name Indonesia which was coined by the English ethnologist George Windsor Earl and Thomas Leonowens.

Thomas was the husband of Anna Leonowens, who tutored the wives, concubines and children of Siam’s King Mongkut from 1862 to 1867.

Anna’s memoirs The English Governess at the Siamese Court had inspired the hit musical The King and I and Hollywood’s Anna and the King.

Also buried there were three members of Jackson family — Lieutenant Colonel Gregory Jackson who was born in 1780, his wife Matilda (born 1776) and their son Gregory (born 1814).

The three passed away within 24 hours of contracting ‘jungle fever’ at their retreat on Mount Elvira in 1835.

The cemetery was closed in the late 19th Century and the last recorded burial was that of Cornelia Josephine Van Someren in 1892.

The cemetery remained unchanged until the Japanese bombed George Town in 1941, destroying a number of graves in the eastern and western ends of the cemetery.

There were 15 types of tombstones in the cemetery made from three main types of materials — granite, marble and sandstone.

Some of the headstones and plaques were carved with information where they originated from.

There are also various decorative motifs found on the graves and headstones.

Among them were anchor (symbolising hope and safety steadfastness; birds (symbolising the soul of the Holy Spirit); cloud (heaven); column (commemorating a noble life; broken column (representing an early death); hand (blessings from heaven); rope (symbolising eternity) and HIS (representing the first three letters of Jesus’ name in Greek).

“It is bounded by coastline along the north and east and by Love Lane to the northwest and Gat Lebuh Melayu, Lorong Carnarvon and Lebuh Carnarvon to the southwest corner.

“The Core Area is protected by 150.04 ha of Buffer Zone, bounded by the sea, Jalan Transfer on the west and Jalan Dr Lim Chwee Leong and Gat Jalan Prangin on the southwest.”

She added that GTWHI was established by the Penang state government as the State Heritage Agency in April 2010 to spearhead efforts to ensure George Town’s legacy will not be lost.

“It is an organisation dedicated to protecting, promoting and preserving George Town as a sustainable city.

“GTWHI works in cooperation with the federal, state and local governments as well as several non-governmental organisations (NGOs) to monitor, promote and execute heritage-related activities. It identifies the problem areas, builds a strategy and calls on experts and stakeholders in its vast network to work with it towards the solution.”

Leong said to ensure the World Heritage Site was understood by as many people as possible, GTWHI was working with many partners and collaborators — from conservation specialists and state and city authorities for better planning, conserving and management of the physical site to historians and art practitioners — on a programme of educational and cultural activities.

“It also engages with school children, students of institutes of higher learning and the public through its programmes of talks and activities,” she added. 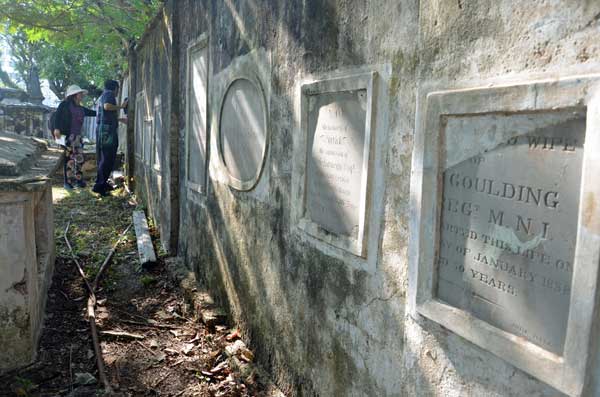 Some of the tombs were destroyed during World War II.