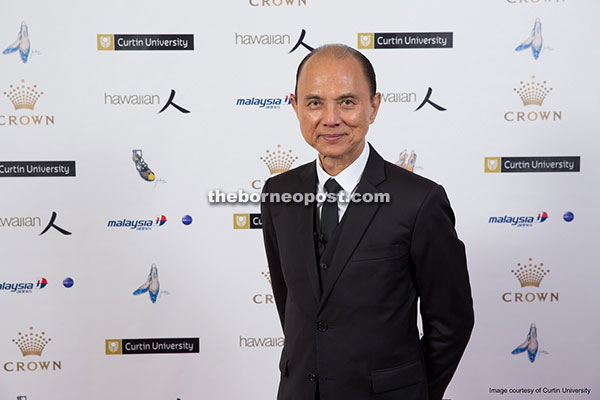 The shoe designer recently visited Curtin University in Perth, Western Australia, to participate in several events, including a master class and the judging of a fashion competition where students competed to win a year-long under him.

As a global ambassador, Choo will galvanise his international connections to provide collaborations and student mobility opportunities with other fashion institutions around the world.

Choo said he hoped to inspire the next generation of fashion designers by providing encouragement and leadership, as well as by sharing his unparalleled knowledge of the industry.

“Throughout my career, I have always respected my father, a shoe designer, and my teacher for giving me the skills. I now want to show people these skills. I want to put my heart and knowledge back into society, back into school and the young people, so that they can learn something. As a global ambassador of Curtin University, I can do this both in Perth and overseas.

“I thoroughly enjoyed my time at Curtin working with the students, not only in sharing my knowledge, but also learning from them as well,” Choo said.

Prof Majella Franzmann, pro-vice chancellor of the Faculty of Humanities at Curtin University, said Choo’s appointment was a recognition of the strong relationship the university had already established with the fashion designer.

“We are thrilled to have Prof Choo as part of the Curtin team. His expertise, industry experience and enthusiasm fit perfectly with Curtin’s commitment to provide our students with access to the very best scholars. Prof Jimmy Choo works passionately for the young designers of tomorrow,” Franzmann said.

Prof Jim Mienczakowski, pro vice-chancellor and chief executive of Curtin University of Technology Sarawak Malaysia, Curtin’s Malaysian campus — said that he too was elated with Choo’s appointment as an adjunct professor and global ambassador.

He added that it was recognition not just for Choo’s contribution to the fashion world, but also the wealth of talent and skills that Malaysia could produce. He said Choo was a fine example for young Malaysians to follow, particularly if they were eager to enter the world stage.

“From humble beginnings here in Malaysia, Prof Dato’ Choo has scaled the heights of the fashion world with his shoes worn by the likes of (late) Lady Diana, Cate Blanchett and Madonna. His name is synonymous with

quality and style, and his shoe devotees stretch across the

“We are proud that such a Malaysian icon is associated with Curtin, and we look forward to perhaps inviting him for a visit to our campus in Sarawak too, so that he may meet and inspire our students who come from over 45 countries around the world,” said Mienczakowski.

In 2000, Choo was bestowed a state award carrying the title of Dato’ by the Sultan of Pahang for his achievements, and in 2002, he was conferred with the OBE (Order of the British Empire) in recognition of his services to the shoe and fashion industry in the United Kingdom.

This was followed by the the Darjah Setia Pangkuan Negeri awarded by the Yang di-Pertua Negeri of his home state of Penang in 2004.