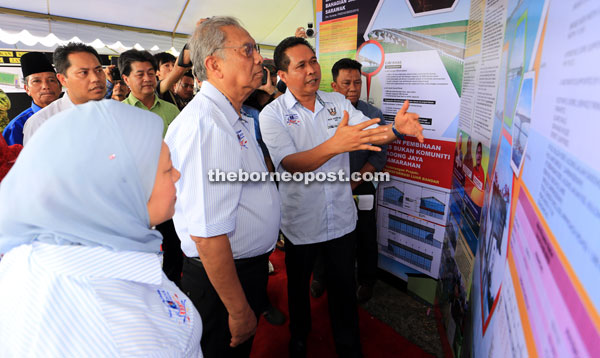 Adenan made this announcement following a request by Minister in the Prime Minister’s Department and Batang Sadong MP Nancy Shukri, that  the state government approve the construction of a sports complex here.

“Therefore I would request for the state government to approve a sports complex in Sadong Jaya,” Nancy said during her speech at the launching of Sadong Jaya Festival which was officiated by Adenan, here, yesterday.

Nancy said as an MP and minister, she spent most of her time in Kuala Lumpur. It was through her close cooperation with Aidel, other elected representatives and government agencies that the constituents were well served.

“I’m not here to campaign but I think the Sadong Jaya constituents will lose out if Aidel is not nominated as the candidate for the upcoming state election as he has played a major role in the development here and we had a lot of discussions to determine the required developments for the villages and this area.”

Nancy said among the high impact projects implemented in the area were road connection projects for the alleys project to houses totalling RM3 million and RM6 million for roads in villages, which were still in the process of implementation.

“RM3 million had been allocated for the construction of concrete drainage in villages throughout Sadong Jaya, while the project that will enhance the local community’s economy is the construnction of ‘Pasar Tani Semera’ costing RM350,000.”

She added that the construction of 1.5-kilometre Batang Sadong bridge costing RM231 million would be the catalyst for the socio-economic development not only in Sadong Jaya, but also Gedong and Simunjan.

“We also have plans to turn Sadong Jaya, Gedong and Simunjan into  tourist destinations by identifying a few tourism products that could contribute to the state’s gross domestic product, when the Batang Sadong bridge is completed next year.”