Monday, January 30
You are at:Home»News»Sarawak»China Coast Guard vessel found at Luconia Shoals
For the freshest news, join The Borneo Post's Telegram Channel and The Borneo Post on Newswav. 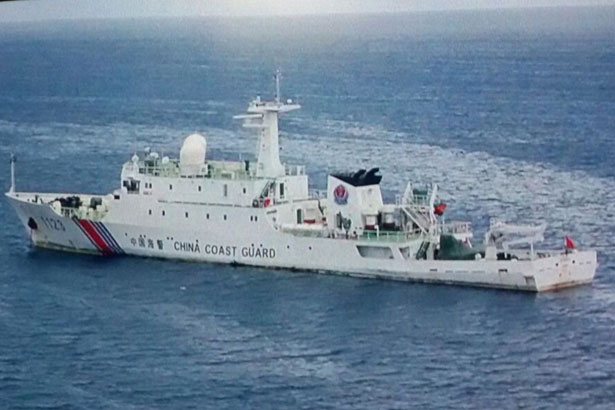 Photo shows the China Coast Guard vessel, which has been anchored in Gugusan Beting Patinggi Ali for about two years.

MIRI: China has been detected encroaching on Malaysian waters at the Luconia Shoals, which are known as Gugusan Beting Patinggi Ali, located just 84 nautical miles from the coast here.

It is understood that a Chinese Coast Guard vessel has been anchored in the area for about two years.

“I had a meeting with the TLDM, MMEA, Wisma Putra and MKN (National Security Council) today (yesterday) with regards to the security of the South China Sea and the movement of illegal foreign fishermen there,” Minister in the Prime Minister’s Department Datuk Seri Shahidan Kassim told a press conference at Miri Airport yesterday.

“With regards to the Gugusan Beting Patinggi Ali issue, we know that there is intrusion in the area, which is why we sent the TLDM (navy) and MMEA (Malaysian Maritime Enforcement Agency) to monitor the area 24/7 to ensure the sovereignty of the country.”

He pointed out that all foreign vessels would normally just pass through the area as they cannot anchor or stay in the area without permission.

He explained that one of the areas within Gugusan Beting Patinggi Ali had become a small island, which resulted in many parties being interested in it, possibly with the intention of encroachment.

Shahidan stressed that the area belongs to Malaysia and that the government will do whatever it takes to protect and defend Malaysian waters in the South China Sea from being encroached on by intruders or unlicensed foreign fisherman.

On illegal foreign fishermen and Suluk immigrants, Shahidan said the government viewed the matter seriously with the MMEA and navy collaborating on addressing the issue.

He said Sibuti member of parliament Ahmad Lai Bujang had highlighted the issued in Parliament.

“We will take action against illegal fishing boats that encroached on our waters because foreign fishermen’s boats are not allowed here,” he said.

Meanwhile, Shahidan suggested the area be developed for tourism as according to him the beautiful and crystal clear waters there are much better than at islands in the Maldives.

Gugusan Beting Patinggi Ali is one of the largest and least known reef complexes in the South China Sea.