Sunday, September 26
You are at:Home»News»Sarawak»BN men: Pakatan ‘marriage of convenience’ will collapse 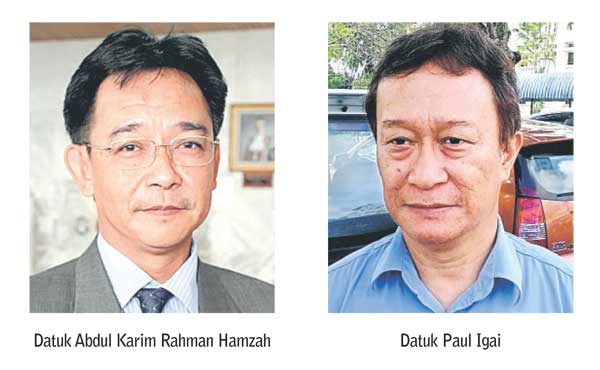 SIBU: Only BN can ensure stability, continuity and harmony of the nation as the opposition pact is constantly at loggerheads, said Assistant Minister of Youth Development Datuk Abdul Karim Rahman Hamzah.

It would just be a matter of time before Pakatan Rakyat collapsed, he said when asked to comment on the move by PAS Dewan Ulama on Wednesday to unanimously pass an emergency motion to annul political cooperation (tahaluf siyasi) and to cut ties with the DAP.

Mokhtar also reportedly said Pakatan Rakyat was dissolved in Sarawak and Sabah due to pressure from the DAP, who not only disagreed and opposed, but lobbied PAS members to reject efforts to enhance the Kelantan Syriah Criminal Code enacted in 1993.

To this, Abdul Karim, who is also PBB Supreme Council member, said: “I see this moment coming from the day Pakatan Rakyat or PR was formed.

“PR was just a ‘marriage of convenience’ to appease the leaders of the three parties, which differ totally in their political struggles.

“It is just a matter of time this union collapses, and we can see it coming now.

“Can we imagine how chaotic it would be if Pakatan had been able to form the government in the last general election only to see them fighting among themselves after that?”

He added that economic and political stabilities would be affected, and confidence towards the nation would be eroded.

“I hope Pakatan supporters could now realise that their struggles are just flimsy struggles. Only BN could ensure stability, continuity and a harmonious nation.”

Meanwhile, SPDP senior vice-president Datuk Paul Igai recalled that he had been reminded by someone that Pakatan Rakyat was always an “unholy alliance”.