Wednesday, October 27
You are at:Home»News»Sarawak»Adenan: Sematan deserves a waterfront 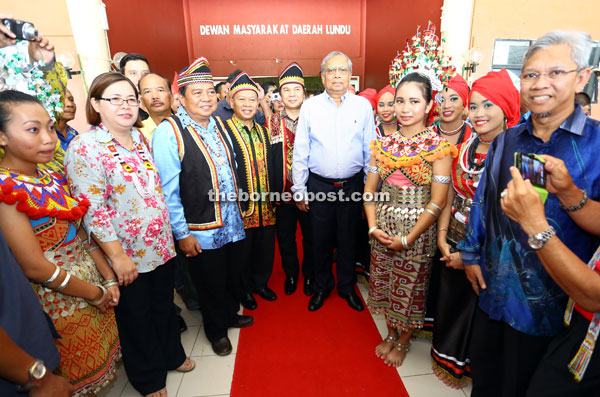 Adenan (sixth right) together with (from fourth left) Ranum, Nansian, Dr Jerip and others during his arrival at the Lundu District Community Hall. — Photos by Muhammad Rais Sanusi

Adenan, who is Tanjung Datu assemblyman, said as the town faces the sea, a good waterfront should be built not only for the locals but also as an attraction for visitors visiting the area.

“Maybe, we will (build the waterfront) like the one in Sibu Laut (Telaga Air). This also will help to beautify the area,” he said at a leader-with-people session held in conjunction with Gawai Dayak 2015 celebration at the Lundu District Community Hall, here, yesterday.

Adenan also announced that the present ageing multi-purpose hall (Balai Raya) near the jetty in Lundu, would be demolished and a new one would be built at the site and the Lundu District Community Hall would be renovated and installed with air-conditioners to make the hall more comfortable for future gatherings.

“There are many more developments that I want to bring to Lundu because this is the chief minister’s area.”

He said the construction of a road connecting Jalan Sematan to Teluk Melano would be built this year, adding that the road, which is part of the Pan Borneo Highway, once completed, would connect Teluk Melano all the way to Lawas.

Adenan said the development would open up a big area and increase the value of land in the areas involved and as such he advised the landowners not to sell their land yet.

He said the government would also established two colleges; one each in Sematan and Lundu. It was previously reported that the two colleges would be a matriculation college and a Yayasan Sarawak technical college, costing about RM200 million.

Adenan reiterated that he is the ‘Chief Minister for All’ — including the Iban, Bidayuh-Rejoi, Bidayuh-Selako, Malay and the Chinese communities and that he respects their cultures.

Opar assemblyman Ranum Mina, the joint organising chairman of the event yesterday, said since becoming the chief minister, Adenan had brought many developments to Lundu.

He hoped that Adenan would continue to lead the state after the election to continue his agenda to develop Lundu and other rural areas in the state.