Monday, March 1
You are at:Home»News»Sabah»‘Nude’ Canadian siblings to be charged in Native Court 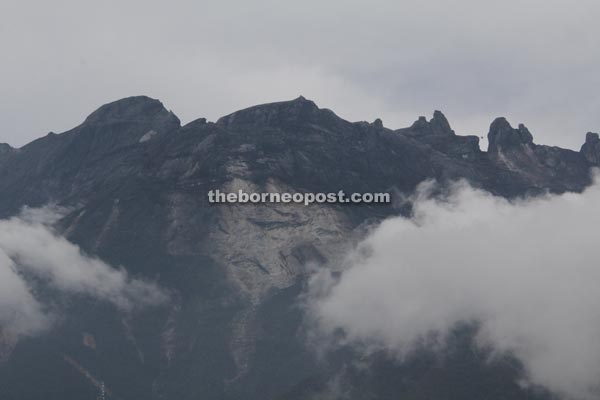 The majestic Mt Kinabalu is the holy mountain of the Kadasan/Dusun community. It has been the belief of the locals that the wrath of Kinorohigan had caused the earthquake following the disrespectful conducts of 10 foreigners on May 30.

KUNDASANG: The two Canadian women who stripped naked on Mt Kinabalu May 30 will be charged in the Ranau Native Court.

Ten community leaders will preside over the Native Court and decide on the penalty to be imposed on siblings Lindsey Petersen, 23, and Danielle, 22 – both of whom have been barred from leaving Malaysia.

The Ranau Native Court, which comprises Ranau district chief, Orang Kaya Kaya (OKK) Mohd Din Salingong, and nine native chiefs, convened at 2pm yesterday, but a decision has yet to be made.

The police will be brought in should they fail to show up.

“The findings of the Ranau Native Court will be based on the native court’s proceedings,” said Din Salingong.

Meanwhile, Kota Kinabalu district chief OKK William Majimbun, when contacted, said the native court should be the authority to handle the case of the 10 foreigners who stripped naked at the mountain to take pictures.

Since the case happened in Kundasang, the Ranau Native Court should be the court to preside over the case because each district has its own ‘adat’ (customary practices).

“There should be a trial in Ranau Native Court, and the Native Court will decide on what should be done to right the wrong,” William told The Borneo Post yesterday.

On May 30, a group of 10 tourists, believed to include the Petersens, two Dutch and a German national, stripped naked for photographs at the peak of Mount Kinabalu.

On Deputy Chief Minister Tan Sri Pairin Kitingan’s statement that the 5.9 earthquake that shook Mount Kinabalu on Friday was the result of the disrespectful conduct of the foreigners, William said whether it was true or not, foreigners visiting Sabah and Sarawak should adhere to local customs and cultures.

“These customs have been practised for generations by our ancestors and now handed down to us. That has been why, until now, every year we still hold a ceremony to appease the spirit of the mountain to ensure the safety of the climbers.

“The foreigners visiting our states must respect our customs.”

William said there was a standard procedure for the native court to come to a judgment. A discussion with the elders must first be consulted and the high priest would later seek supernatural instructions to determine what kind of penalty should be imposed on these customary law offenders.

“As this is the first of its kind, the case will be more complicated than other cases that we have dealt with. The native court dealing with it will have to be more cautious because the case has attracted a lot of public interest.”

District chief of Penampang, OKK Brayan Matasing, also held the opinion that these foreigners had breached the customary laws of the local Kadazan/Dusun, who considered the iconic mountain a sacred ground.

“As such, they should be penalised. Payment for ‘sogit’ (a penalty where payment for sacrifice animals such as buffalo, chicken or pigs be charged on offenders) should be demanded, and a ritual to appease the spirit in the mountain should be held.”

Brayan believed that for this case, the ‘sogit’ should be buffaloes, but the number of buffaloes should be determined by the local Kundasang customary law.

Meanwhile, The Board of Trustees of The Sabah Parks chairman Datuk Seri Tengku Zainal Adlin, when contacted, said there were strict rules or standard operation procedures (SOP) that govern climbers attempting Mount Kinabalu.

“You are not even allowed to shout, what more to urinate and strip naked. This is the first of such disgraceful incident that has ever happened in the last 50 years of our park.”

“Their (nudists) behaviour is totally unacceptable as they just showed that they did not respect anyone. Just imagine, if you are a Christian, would you urinate in your church? Or if you are a Muslim, would you strip yourself naked in a mosque?

“In this case, these foreigners stripped naked and urinated on Mount Kinabalu, the holy mountain for the Kadasan/Dusun. The mountain is greatly respected by the locals, where every December, without fail, the park, together with local native priests, will hold a special service attended by the natives, park wardens and mountain guides.”

“Whatever fine imposed on those involved must be adhered to,” stressed Tengku Adlin.

In August last year, a magistrate court in Penang sentenced six men to one month jail and RM5,000 fine in default three months’ jail for causing public unrest under 284(a) of the Penal Code, while four others claimed trail for participating in a nudist event at a beach in Penang.

One of them, who was found distributing and possessing pornographic material, was slapped with an additional jail term of six months.

Previous ArticleLessons to be learned from quake
Next Article Sabah quake: 55 aftershocks recorded, last one on Sunday