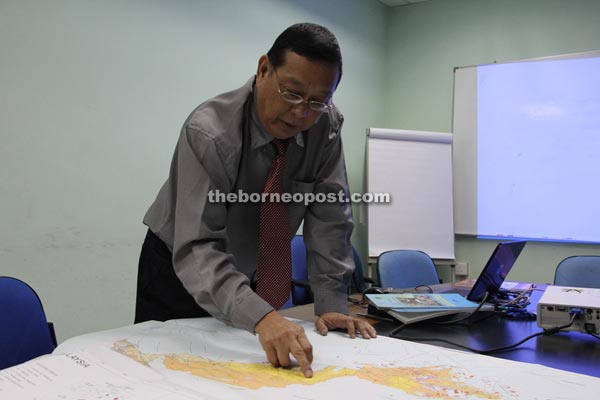 The seismotectonic map showing earthquake fault lines in Sarawak drawn up in 2006. 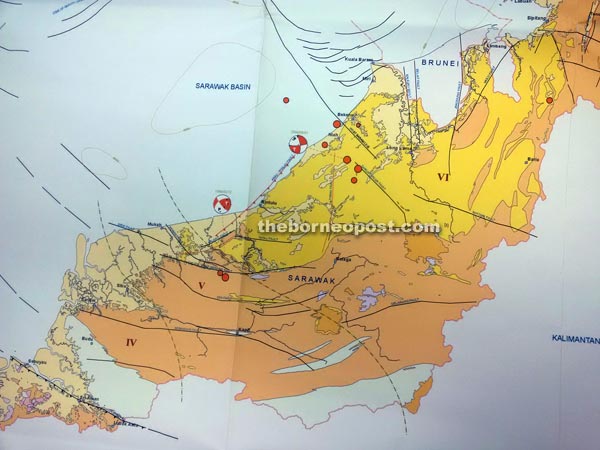 KUCHING: A seismotectonic map showing earthquake fault lines in Sarawak drawn up in 2006 by Minerals and Geoscience Department in Sabah shows the site of the proposed Baram Dam is in the close vicinity of two fault lines.

This was disclosed by Alexander Yan the former director of Minerals and Geoscience department to The Borneo Post in Kota Kinabalu on Monday on the sidelines of a briefing on the recent earthquake in Kundasang/Ranau which claimed 18 lives.

“If the fault lines are active, don’t build the dam. Active faults are capable of major tremors.

“The fundamental is hydropower stations should not be built on earthquake generating fault lines” Yan cautioned.

However, Yan who was recently appointed a member of the Board of Geologists Malaysia and also a member of Institute of Geology Malaysia said the fault lines need to be defined and added that a fault line study must be carried out before the construction of Baram Dam or any mega dam.

“Firstly, it is to determine whether these fault lines are active. Secondly, if active, whether they are earthquake generating faults.

Asked how much it would cost to do all these studies to determine the fault lines, Yan estimated it at RM500K.

“It should be about half a million ringgit, or allocate RM1 million should be sufficient.”

On May 20, Sarawak Energy Bhd (SEB) announced that it would construct the Baleh and Baram HEP dams simultaneously.

He was quoted to have said that the seismological studies was basically not relevant and that whether it was one dam or more would not cause any earthquake.

“However, the principle is attention should be paid to do studies and, if necessary, install warning systems for earthquakes to show our commitment to safe, scientific and sustainable development.”

The Borneo Post has quoted in its Tuesday’s edition that Yan believed loss of lives could have been prevented if the fault monitoring system proposed had been installed.

“The fault movement monitoring serves as an early warning system for sign of impending seismic activity in the area. The people can be warned to be careful and not to go near to certain areas just like tsunami warning system.”

Yan’s proposal for installation of Global Positional System (GPS) was put on hold in 2013 by the federal government due to budget constraint.