Tuesday, November 24
You are at:Home»News»Sarawak»DID to improve drainage in housing areas 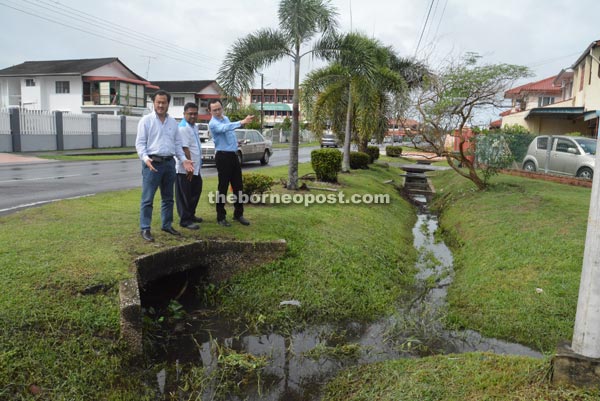 Law (right) inspects the drainage system at Jalan Kropkop 4. Hii is at left. 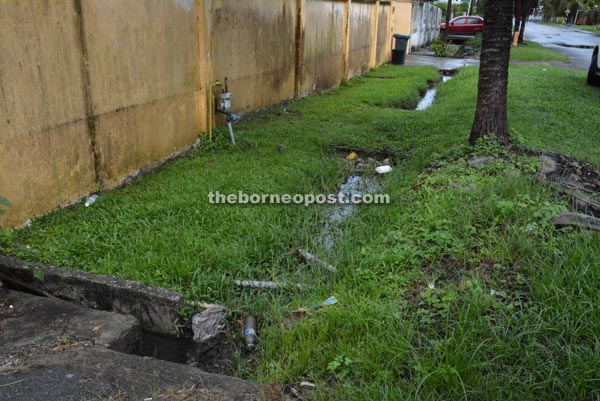 MIRI: The Department of Irrigation and Drainage (DID) will upgrade the drainage system at Jalan Krokop 4 and Jalan Jee Foh 8.

DID divisional engineer (Miri and Bintulu) Law Wee said after continuous heavy rain on Tuesday night, the drains had overflowed.

“This is due to the blocked drainage from erosion at the bank where the soil collapsed due to the absence of a concrete structure at the bank,” he said during a site inspection with a team of Miri City Council (MCC) councillors, government agencies and Majulah Miri chairman Datuk Hii King Chiong yesterday.

“It has caused stagnant water at the other end of the drain, which during heavy downpours, the water overflows and even floods the houses nearby up to one feet in height.”

Law said DID would carry out an immediate survey at the area for the concrete drains upgrading project.

“From the estimation of costs, we will look at our budget allocation which hopefully when it is approved, the project will be done in two months’ time,” he said.

According to Hii, residents had complained to him about the issue.

“This is no matter of political gain, but just to help the residents who have been complaining over the issue for years. Once a proper drainage system is done, they will live in comfort and need not worry when the rainy season comes,” he said.

Meanwhile, Foo Sie King, a house owner at Jalan Jee Foh 8, said the drainage in the area has been poor since he first moved to the area over 40 years ago.

“The only thing we had for the water flow is a shallow ditch which during the dry season is infested with dengue-carrying mosquitoes due to the stagnant water,” he complained.

Foo said he has tried to seek assistance several times in the past but there was no action taken.